How a Getaway in Naran Valley Helped Ease a Nervous System 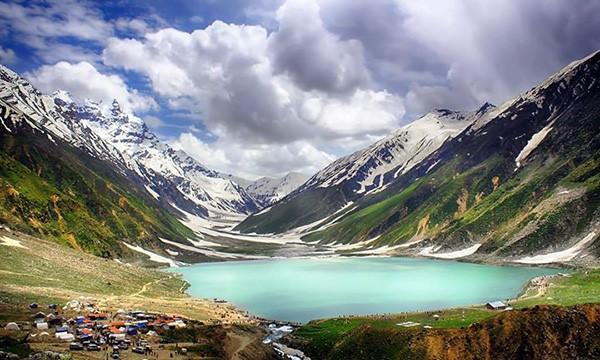 The Mountains Are Calling

Whether as a hobby or for work, traveling has a way to encapsulate your worries and drown them – something that takes away the heaviness dealing with everyday life has brought. But, unfortunately, with today’s “hustle hard” culture, we forget to slow down and do not realize that taking time to relax is equally crucial to living our lives successfully.
A trip to Naran Valley proved to be just that for me.
On the way to Naran, the calming landscapes, the cool mountain air, the slow lifestyle, away from the city, were just what I needed to slow down and catch my breath.
We traveled in a group with few friends and few strangers ass our travel mates.

Naran, Here We Are

When we reached the magnificent Naran valley, we were starving, and as the sun was going down, we decided to cook our food ourselves. That decision led us to a spot where the river Kunhar was flowing nearby, surrounded by majestic mountainous views. The water from the river was ice-cold but refreshing to the point that one wouldn’t have enough of staying connected.

We decided to cook our food by the river, and the nomadic way of bringing ourselves to that is a tale in its own. The light breeze picked up momentum as the sun went down, and our LPG-Cylinder wouldn’t hold. Our driver was an inhabitant of the area, so he knew how to fire wood in the face of strong winds. One went and washed the raw meat we got from the main Bazaar and washed it in the chilly water. We all stood around the fire to protect it from going out. Finally, an hour into the activity, our chicken pulao was served – it felt like one of the best meals we’d ever have.
I learned from it that there’s always a way out if you are desperate enough. The possibilities a human mind creates when faced with a limiting situation can be infinite, if you genuinely believe in your strength.

Adding to this, Naran is a place that offers you the grandeur of nature wrapped beautifully in lush green meadows, glorious mountains, gushing rivers, and picturesque lakes. Take advice from someone who has a first-hand experience and unwind your nerves by taking a trip up North. You won’t regret it.
The same night, outside our hotel room, I stood in front of the vast open sky and looked at it, only to find a million stars shining back at me.

Next day, we all decided to go up to Lake Saif ul Mulook in a jeep. As it turned out, a regular vehicle would not take us up there, so we decided to leave our car and hire a mountain jeep.
The thrill was just around the corner!
We were all jam-packed into a jeep, and an elderly gentleman, perhaps 60 years old, got ready to take the driving seat. At an elevation of 10,500 feet, Lake Saif-u- Mulook is the primary water source for the Kunhar River.
It is also known as the Fairy Lake, and the myth here is that fairies still come out at night to dance on the water surface. The route leading to the lake, on the other hand, was far from spectacular. We were practically hurting from banging into the jeep’s iron rails as it sped past the boulders on a rocky track, what seemed like an eternal upward trip. The driver, though old, was an expert.

Finally, we arrived at a sort of parking lot, from which a few steps downhill was the majestic Lake Saif ul Mulook. I would say that photographs have done no justice to that place. The view was breathtaking, mesemerizing, and captivating. We made our way down to what appeared to be a dock and decided to take a boat ride to the other side of the lake, the smell of local fried food drifting through the air. The guide narrated the folklore of fairies as we sailed across the calm waters of the lake.
We also took a short hike on the other side of the lake and went face to face with the most significant glaciers we’d ever seen. We were astounded that such a massive block of ice could just be resting there, melting away. We clicked pictures taking in the stunning beauty of the surrounding. I finally realized why poets are always inspired by nature and how it can soothe your entire body. Breathing in that fresh air felt like re-awakening, absolute happiness.
It was soon time to head back, so we took the boat, went back to find our jeep, and took off. On our way back, we stopped at this glacier right in the middle of the road, which formed what could only be called an ice cave. The inside had melted off, creating a hollow space, and people were standing underneath that to take pictures. The experience felt like walking into a life-size refrigerator. Nevertheless, I enjoyed the journey back down with a smile on my face. Once we reached our accommodation, we all had some steaming hot biryani and later snuggled into our beds.

The next day, we all woke up around seven o’clock, after having our breakfast we left for Babusar Top around 8:30 a.m. We took around 3 hours to reach there because it is a peak, and we crossed many streams and glaciers along the route. The drive on the curvy road was fun, as was the view from the top. So we snuggled in a tent and had fried pakoras from a kiosk and tea. The temperature was around one °C, and the howling wind worsened, so the tent was a great relief. Intermittently falling snow flakes gave us immense pleasure, catching the snowflakes in the palm watching it disappear in the blink of an eye, sheer pleasure.
Few groups were performing, the local dance at the beats of local music. Joy multiplied!
After spending some time at Babusar we left for Naran, and before leaving Naran we stopped for some rafting in river Kunhar (the completely non-dangerous kind) to have the most incredible experience. Few of us also went for the zip-line, thrilling it was.

Winding Up or Unwinding

As we arrived back from Babusar at our hotel, it was packing time. After having a late lunch, we eventually got on the road to return home. As we progressed into the valleys, the light faded, and I could no longer take in the breathtaking scenery. It was then that I discovered the roads were not as lovely as they appeared on our way to Naran. In my hazy slumber, it seemed like forever to reach back home.
It was 2:30 a.m. when I finally walked out onto my home’s driveway.
I felt as if the darkness within me – evil thoughts, terrible memories, dark sentiments, negativity – is left behind in the tinted windows of the vehicle. I was back home with pleasant memories and an unforgettable experience.

How a Getaway in Naran Valley Helped Ease a Nervous System
×