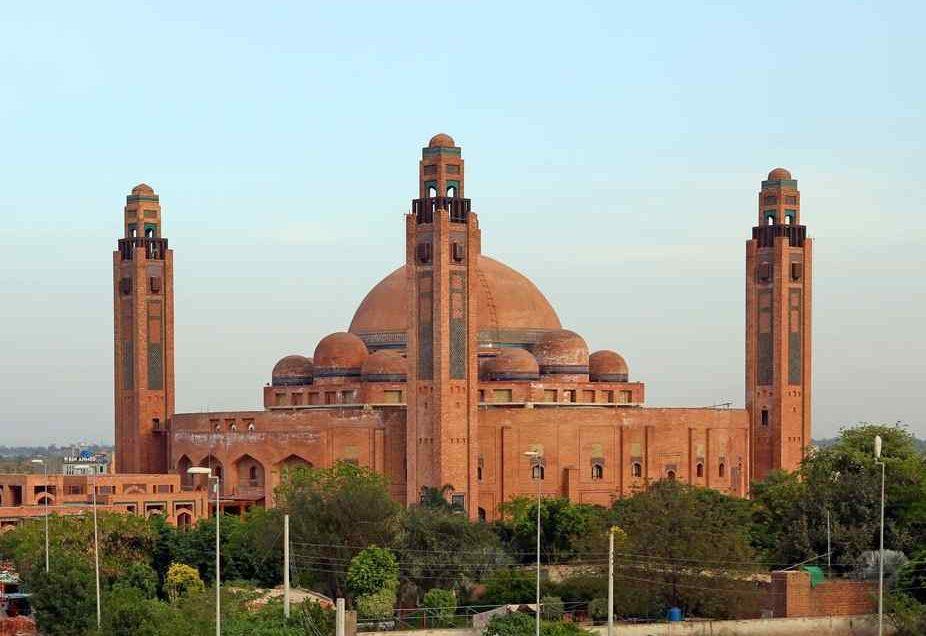 The Grand Jamia Mosque is large in the city of Lahore of beautiful Pakistan’s Punjab province. It is situated in Bahria Town. It is Pakistan’s third-largest mosque and the fourteenth largest mosque in the world. That is why it is the main tourist attraction for visitors and tourists and the best place to visit.

It was inaugurated on Eid al-Adha, 6th October 2014, after being designed by Nayyar Ali Dada. It can hold 25,000 worshipers inside, with a total capacity of 70,000 in the courtyard and hallway connecting to the main prayer venues.

The construction consists of four 165-foot-tall minarets and a big dome surrounded by 20 smaller domes. The outside is covered in 4 million Multani tiles that were handcrafted. Custom-made carpets from Turkey and more than 50 chandeliers from Iran are used to embellish the interior. An Islamic historical museum with rare Quranic collections, an Islamic library, and an Islamic art gallery with antique items are located on one of the levels. The mosque’s surface area is covered in almost four million Multani handcrafted mosaic tiles.

The Grand Dome is positioned in the center of the structure, 20 feet above the ground, with the rooftop rising to 80 feet and the Grand Dome flanked by 20 lesser domes. The 165-foot-tall minarets mark the extremities of the entire building. The mosque welcomes with six arched wooden doors and then dazzles you with vistas of white chandeliers, tile mosaics, and exquisite frescos.

The Center Dome is the “jewel in the crown” of this beautiful work of art. With a height of 40 feet and a spread of 50 feet, this tree is a sight to behold.

The indigenous architecture is made entirely of local materials, and it reflects the original character of Indo-Islamic architecture while also incorporating a variety of modern aspects. To prevent the saltpeter usually present in Lahore Bricks, the basic structure is composed of “Brick Gutka” manufactured of special “Multani Mitti.”

The brick structure has been lavishly embellished with brightly colored glazed tile mosaic art in geometrical and floral patterns. It was intended to be a 6.6 million architectural marvel that combined modern and classic Islamic creative forms. The front is covered in Greek and Italian white marble, while the interior is decorated with Islamic calligraphy.

The workers hand-placed 4.5 million handmade ceramic tiles, which took four years to complete. The octagonal-shaped minarets rise magnificently to a height of 165 feet and are a stunning display of craftsmanship. Each minaret’s base has four arch-shaped wooden doors with rich mosaic art in vivid colors that soar to the structure’s summit. Each minaret has wooden balconies built of “Sheesham” and cupola-shaped canopies on the rooftops.

The manicured courtyard was constructed in the traditional “Charbagh” style, which is a Persian-style garden pattern seen in many of the Sub-famous Continent’s mosques. The quadrilateral garden is separated into four pieces by four paths, each with a lovely water fountain in the center.