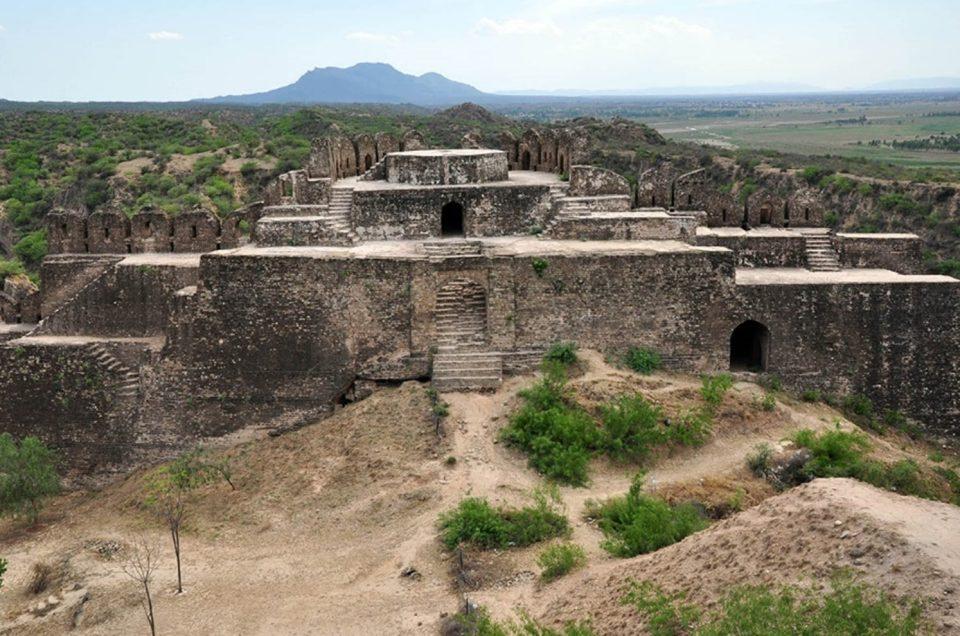 On the peak of the Tilla Jogian Mountain in the Salt Range of Pakistan’s beautiful Punjab region, there lies an ancient Hindu temple and monastery complex known as Tilla Jogian. It is one of the best places to visit as once you arrive, you forget about your troubles and become engrossed in the natural beauty of the area. As one begins to enjoy the profoundly calm, undisturbed solitude of being out in the forest, this spot is undoubtedly a natural attraction.

Before 1947, the complex was the most prominent Hindu Jogis center in Punjab, housing hundreds of spiritualists. The location is also significant in Sikhism because of its ties to Guru Nanak, the Sikh faith’s founder.

The Tilla Jogian complex lies about 25 kilometers west of the cities of Jhelum and Dina on Pakistan’s Potohar plateau. MOTA GHARBI is about 25 kilometers away. The complex is near the Jhelum River and the Grand Trunk Road, which was once used to connect Central Asia and India. Tilla Jogian is also close to the Rohtas Fort and the Katas Raj Temples, which are prominent Hindu pilgrimage sites with a sacred pond claimed to be formed by the Hindu god Shiva’s teardrops.

The Tilla Jogian complex is located on a peak with the same name in Pakistan’s Salt Range. The temples are positioned near the summit of the mountain at an elevation of 975 meters (3200 feet), resulting in a cooler and wetter climate than the Punjab plains. The complex is set in a woodland environment with olive trees, pine trees, and Acacia Modesta.

How to get there

Visitors can either take the traditional path or the Jeep track there. The traditional route begins in a settlement at the mountain’s base and winds steeply up the mountain’s slope. Climbing abilities and stamina are required for the ascent via vegetation, rock, and brambles.

Another path connects the two sides of the Kaghan River, where the road disappears and the bed must be navigated. The route goes to the Rohtas Fort, which was erected by Sher Shah Suri after his overthrow of Mughal emperor Nasir al-Din Humayun during his brief but productive reign. The route ascends 3,200 feet via this majestic doorway and another at the further end, culminating at the summit of the lonely peal on which the monastery stands.

The Mountain of Tilla Jogian

From medieval times onwards, Gorakhnath, Gorakh, or Goraksa in Sanskrit, the Nath/masters in numerous traditions other than Punjabi. The Naths are Yogic and power masters who, as renouncers, are monastic ascetics whose heritage must be passed down by recruitment and guru-disciple succession.

Some have identified “Nathism” as a distinct strand of popular Indian faiths, possibly signifying an ancient religious heritage alongside “Vaishnavism” and “Shaivism.”

Tilla Jogian has been a Hindu pilgrimage site for at least 2000 years, according to legend. The complex is thought to have been built in the first century BCE. Guru Gorakhnath founded the Kanphata Jogi, an ascetic order known for its members’ ear piercings, which was centered in Tilla Jogian.

The importance of Tilla Jogian as a Hindu pilgrimage site attracted Guru Nanak, the founder of the Sikh faith, who meditated here for 40 days in the early 1500s. Mughal Emperor Akbar paid a visit to the “Shrine of Balnath,” a powerful and well-known yogi. His biographer Abul Fazal reported that the shine was “so old” that its origins were unknown, and that Akbar was astonished at the site’s age. Jahangir, the 17th-century ruler, also paid a visit to the temple complex. The structure was sacked and looted by Pashtun king Ahmad Shah Abdali during one of his many invasions into Punjab following the fall of Mughal power. Following Abdali’s loss, the complex was swiftly reconstructed.

Maharaja Ranjit Singh celebrated Guru Nanak’s visit in the late 1800s by building a stone-lined pond and a tiny monument to indicate the precise site where Guru Nanak is claimed to have meditated.

The local deputy commissioner built a mansion on the site under the British Raj, attracted to the location by the cooler weather. Before the Partition of British India in 1947, the location was considered the most important pilgrimage site for Jogis in Punjab. Before Partition, on the first day of the Hindu month of Chaitra, an annual festival was held, during which all attendees were provided communal meals.

Before Partition, the place was considered the most important Jogi pilgrimage site in Punjab, and hundreds of Jogis lived there. Tilla Jogian used to be the site of a Brahminical seminary, which was surrounded by large residential areas.

Waris Shah’s Punjabi poetry Heer Ranjha, published in 1766, mentions Tilla Jogian. Ranjha, the protagonist of the novel, came here seeking consolation to his previous love while on the mend from heartbreak, sublimating his love and passion in the spiritual world. Following Guru Goraknath’s disciples’ tradition, he had his ears pierced here.

The site has been searched by local people in search of coins and souvenirs to sell to visitors. The site has been overrun by olive trees since 2012, resulting in the site’s progressive demise.