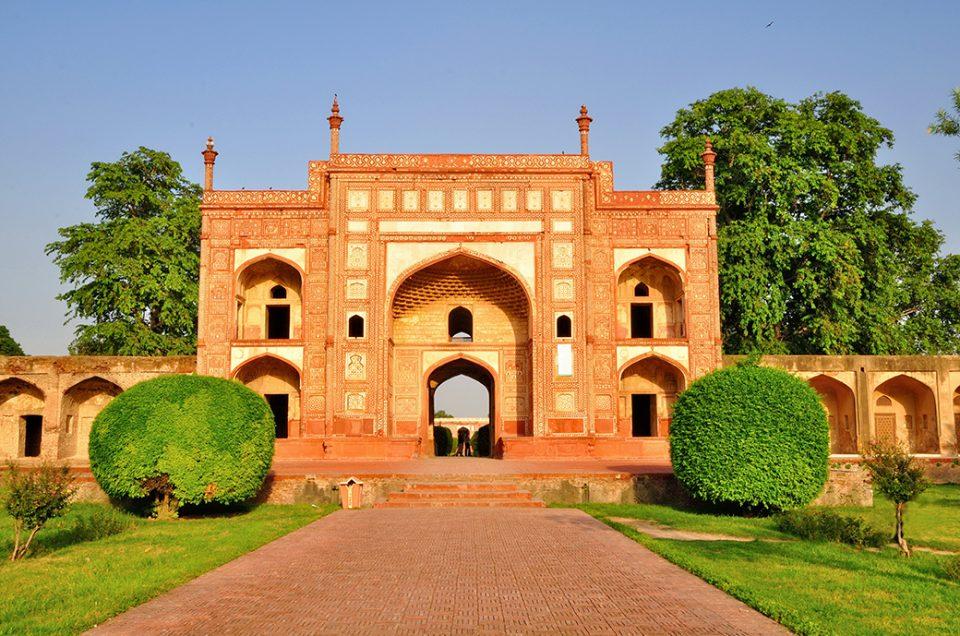 The Tomb of Jahangir is a tomb built for the Mughal Emperor Jahangir in the 17th century. The mausoleum was built in 1637 and is located along the banks of the Ravi River in Shahdara Bagh, Lahore, in Pakistan’s beautiful province Punjab.

The site is known for its interiors, which are lavishly decorated with frescoes and marble, as well as its exterior, which is adorned with pietra dura. The mausoleum, along with the neighboring Akbari Sarai and the Tomb of Asif Khan, forms a group that has been nominated for UNESCO World Heritage designation.

It is a significant tourist destination, and thousands of people visit it every day to learn about its fascinating history.

As he was leaving Lahore for Kashmir, Jahangir died at Rajauri. His remains were returned to Lahore and buried in Shahdara Bagh on the Ravi River’s banks.

Emperor Jahangir was buried in Lahore, in Noor Jahan’s historic pleasure garden known as Dilkusha Garden, as per his last wish. The mausoleum is situated three miles northwest of the city, near Shahdara on Ravi’s banks.

Although contemporary court sources credit Shah Jahan with the construction of his father’s tomb 10 years after his death, it is more likely that Noor Jahan’s vision was the driving force behind it. The empress was a big supporter of architecture, having constructed several structures and gardens.

In 1627, she constructed her husband’s mausoleum, based on her parents’ burial place, Itimad-ud-Daula tomb in Agra. She also became a permanent resident in Lahore after her husband died, allowing her to have a say in the monument’s design and construction. Dilkusha Garden, which became Jahangir’s final resting place at his request, was owned by none other than the Empress herself. But, to be fair to Shah Jahan, no money was spared. The monument, which took ten years to construct, cost Rs. 10 lakhs.

It is situated in a lovely walled garden. It has four minarets that are 30 meters tall. The inside is lavishly decorated with paintings, pietra dura inlay, and colored marble.

The tomb is entered through two large stone and brick entrances facing each other (to the north and south), which lead to the Akbari Serai, a square courtyard. This courtyard leads to another on the western side, which provides a complete view of the garden in front of the mausoleum, which is intersected by four-bricked canals that branch out from the center, and in which numerous now-defunct fountains once stood.

The mausoleum’s passageway is embellished with a beautiful mosaic depicting flowers and Quranic texts. The mausoleum’s interior is a raised sarcophagus of white marble, the sides of which are worked with mosaic flowers in the same beautiful style as the tombs in Agra, India’s Taj Mahal. The ninety-nine attributes of God are inlaid in black on two sides of the tomb. Beautiful ‘jalis’ allow light to pass through in a variety of patterns.

The tomb’s grounds, which total 55 acres, are set out in a classic charbagh layout, with perpendicular routes bisecting it. The Chahar bagh’s setting is masterfully executed. Its four parterres are split into sixteen divisions by a brick geometric pavement flanking short water channels, with an alternate octagonal and square talab at each intersection (tank). The northern and southern gates are huge, with red Sikri sandstone and white marble inlay on the southern one.

The tomb itself is made of red sandstone with floral marble inlay and consists of an 84-meter-square arcaded platform or takhgah. The white marble cupolas on the four corner minarets rise in five steps to a height of 100 feet. The shaft is adorned with pink and white marble chevrons, and each minaret is crowned by a domed kiosk.

Openings on each of the platform’s four corners lead down long corridors to a central, octagonal chamber housing the chabutra, a marble cenotaph resting on a platform. The marble cenotaph is regarded as one of India’s best. It has precious stones placed in naturalistic floral patterns, as well as black calligraphy inscribed with Jahangir’s death date and ALLAH’s ninety-nine names.

The crypt once had a second floor; a platform erected on top of the massive square one still survives. The remains of a marble screen indicate that it was originally enclosed, and indications indicate the whereabouts of a second cenotaph.

The second story, however, is thought to have remained unroofed because, like his predecessor Babur, Jahangir had desired that his tomb be left open to the sky before his death. A connected, rectangular area known as the Akbari Seria is located to the west of the charbagh tomb garden and functioned as the mausoleum’s forecourt or chowk-i jilo khana. A modest mosque can be found on the western side of the building.