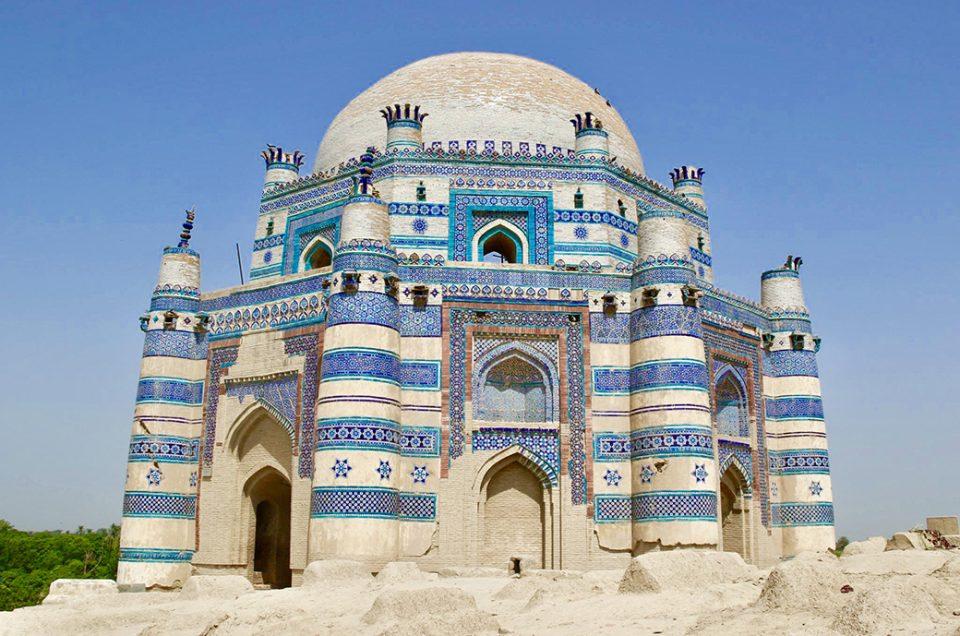 Uch Sharif is a historic town in Pakistan’s beautiful Punjab province, located in the south. Uch was supposedly created as Alexandria on the Indus, a town founded by Alexander the Great during his Indus Valley invasion.

During the Muslim conquest of the subcontinent, Uch was an early foothold of the Delhi Sultanate. After the immigration from Bukhara, it was also known as the home of the Naqvi/Bukhari’s. Between the 12th and 17th centuries, Uch was a regional metropolis that provided a shelter for Muslim religious scholars escaping persecution in other countries. It is a major tourist attraction where countless people visit every day.

Until the 12th century, the city of Uch was known as Deogarh (“Stronghold of Giants”). The roots of the current name of the city are unknown. Jalaluddin Surkh-Posh Bukhari, a renowned Central Asian Sufi mystic from Bukhara, is said to have arrived in Uch and persuaded Sunandapuri, the town’s ruler’s daughter. Jalaluddin Bukhari asked her to build a stronghold, which he named Uch, or “High,” after her conversion.

For a long time, the name Uch for the area was not widely recognized, and early Muslim historians did not refer to the city as Uch. For example, the town of Bhatia, which was invaded by Mahmud of Ghazni in 1006, is most likely Uch.

According to British officer and archaeologist Alexander Cunningham, Uch was founded in 325 BCE as the city of Alexandria on the Indus by Alexander the Great. The city, which was founded by residents of the Greek province of Thrace, was situated at the junction of the Acesines and the Indus rivers. Uch was once on the banks of the Indus River, but the river has since changed course, and the juncture of the two rivers has moved some 25 miles southwest.

Muhammad bin Qasim captured Uch in 712 CE. There are few details about the city in the centuries before his attack. Uch was most likely the town known as Bhatia, which was taken by Mahmud of Ghazni in 1006. Uch became a center of Nizari missionary activity for several centuries after the schism between the Nizari and Musta’li sects of Ismaili Shi’ism in 1094, and today the town and surrounding region are littered with multiple tombs of influential pirs, as well as pious daughters and wives of that Sufi pirs.

Throughout the medieval era, the region around Uch and Multan was a center of Hindu Vaishnavite and Surya pilgrimage. The Satpanth tradition arose through their connections with the Ismaili heritage. Uch was at the heart of a region steeped in both Vedic and Islamic traditions throughout this time. With the foundation of the order by Bahauddin Zakariya in nearby Multan in the early 1200s, the city would eventually become a center of Suhrwadi Sufism.

In 1175, although still under the control of the Ismaili Qarmatians, Muhammad of Ghor seized Uch and the neighboring Sultan. The town was most likely taken from the Sindh-based Soomra family. For ages, Sindh’s successive kings tried to hold Uch and Multan under their control.

Uch had a population of roughly 2-3,000 people when Pakistan gained independence in 1947. Uch was acceded to the nascent Pakistani state as part of Bahawalpur State, although it remained part of the autonomous Bahawalpur state until 1955 when it was officially incorporated into Pakistan. Uch is a small city with a large number of graves and shrines, making it a popular tourist and pilgrimage destination.

Bahawalpur is 84 kilometers away from Uch. The river switched course and is now 25 miles away from the junction of the Indus and Chenab rivers, which have migrated to Mithankot. The city is now located near the Chenab river on a huge Alluvial plain. The Cholistan Desert, to the southeast, covered enormous swaths of land.

Much of Uch’s old urban fabric has been preserved. The old town is divided into three sections: Uch Bukhari, named after Bukhara’s saints, Uch Gilani (or Uch Jilani), named after Persia’s saints, and Uch Mughlia, named after the descendants of Mongol invaders who resided in that sector. Monuments may be found all across the city, connected by small streets and twisting bazaars. The most significant collection, known as the Uch Monument Complex, is located on the western outskirts of the old city. The historic core is located close to a huge field that is used as a mela ground, or fairground, for the town’s saints’ festivals.

Uch’s urban fabric is still intricately woven with 17 tiled funeral monuments and accompanying structures. The shrines, particularly Syed Jalaluddin Bukhari’s and his family’s tombs, are constructed in a regional traditional style unique to southern Punjab, with tile work imported from Multan. These tombs were typically domed tombs on octagonal bases with Tughlaq military architecture characteristics such as ornamental bastions and archways.

The Uch Monument Complex, which has three shrines built over 200 years and 1400 tombs, is a potentially inscribed UNESCO World Cultural Heritage site. The first shrine, according to legend, was built for Sheikh Baha’al-Halim by his disciple, the Suharwardiya Sufi saint Jahaniyan Jahangasht (1307–1383), the second for the latter’s great-granddaughter, Bibi Jawindi, in 1494, and the third for the latter’s builder.

Many of the city’s tombs were severely damaged by flooding in the early nineteenth century, including structural issues and masonry and finish decay. The Uch Monument Complex was featured in the World Monuments Watch by World Monuments Fund in 1998, and again in 2000 and 2002, as the concerns remained.

Following that, American Express donated financial help for conservation to the Fund. The World Bank will give the Punjab government $500 million to renovate religious sites such as Bibi Jawindi’s tomb and Uch Sharif Bahawalpur’s mausoleum.