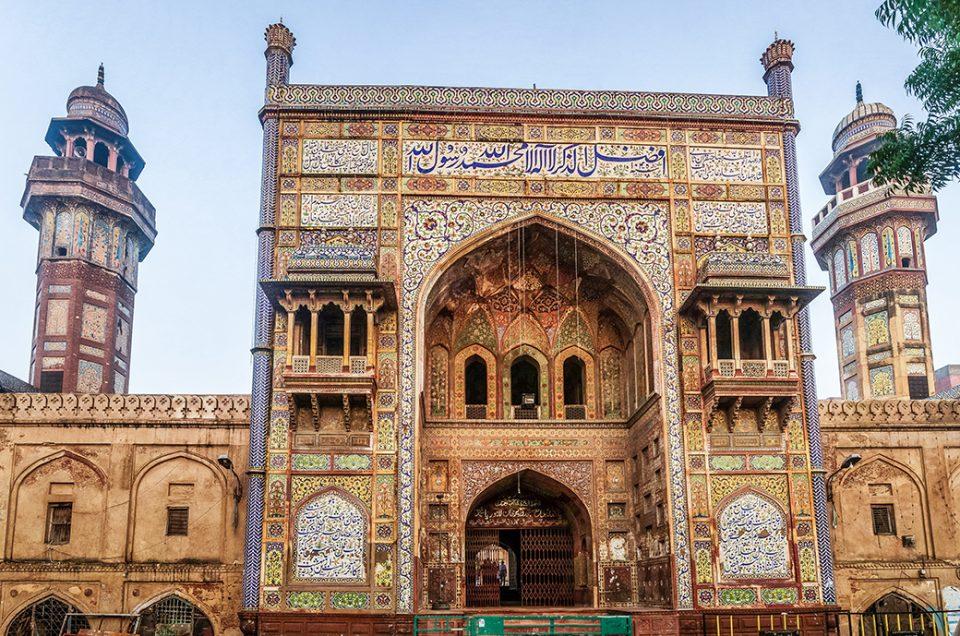 Wazir Khan Mosque is the most elegantly decorated mosque from the Mughal era, and it still serves as the major site of worship in the old city of Lahore, capital of Pakistan’s beautiful province Punjab. It stands towering outside the Delhi gate of Lahore’s walled city, passing through a bustling bazaar where the blaring horns and squabbling voices of busy consumers can be heard through the mosque’s walls.

The mosque’s intricate Islamic design and architecture transport you to a time when Muslims ruled the subcontinent. The walls are covered in very exquisite patterns such as mosaic design, also known as Kashi Kari, fresco painting, carved stones, and brick outline fresco, all of which contribute to the mosque’s peculiarity.

It is a popular tourist destination, with thousands of visitors each day interested in learning about its intriguing design.

It was constructed around the ancient tomb of Syed Mohammad Ishaq Gazrooni, better known as Miran Badshah. He emigrated from Iran in the 13th century and lived in Lahore during the Tughlaq dynasty’s Turkish-Muslim rule. The Wazir Khan Mosque was part of a bigger complex that also comprised a row of bazaars where calligraphers and bookbinders repaired holy manuscripts and painted Quranic verses.

Over time, however, the Calligrapher’s bazaar grew, and other merchants began to sell spices and other goods. The proceeds from these markets were utilized to maintain the mosque. Until recently, there have been numerous stories in the vicinity of the old Wazir Khan Mosque in Lahore, which is a distinguishing aspect of the Wazir Khan Mosque.

In 1634, A.D., work on the structure began. The mosque, which is only a short walk from the Lahore Fort, is significant because it is where Emperor Shahjehan used to offer his Friday congregational prayers.

Wazir Khan Mosque is connected to the walled city of Lahore via a Royal Trail, which is a 1.6-kilometer path from the Delhi Gate. Many Mughal Emperors rode their horses to the Lahore Fort through Delhi Gate.

The rectangular Mughal-era mosque is 282.7 by 165.4 feet in size, with four magnificent minarets defining the corners of the main courtyard. Let’s take a closer look at the Wazir Khan Mosque’s design.

It has four minarets, much like any other mosque, that mark the corners of a vast courtyard, contributing to its opulence and grandeur. The construction and style of the Wazir Khan Mosque are reminiscent of Mughal era architecture, with bricks and tiles covering the walls. The mosque’s main entrance is a massive Aiwan that faces the Wazir Khan Chowk. The Islamic confession of faith is written above the Aiwan.

The entry façade is adorned with quotations from the Prophet PBUH and verses from the Quran. A dome crowns the five sections, which open onto a vast courtyard. The central hall, which was designed per Persian architectural traditions, is the largest prayer hall.

The enormous dome is supported by four arches, resulting in a square pavilion called Char Taq. The dome’s bottom is covered in artistically created paintings depicting an Islamic concept of heaven. There will be trees and food platters supplied with wine. Another fascinating detail about the Wazir Khan Mosque is that it was the first mosque of its kind in Lahore. Other mosques, such as Badshahi Mosque, followed suit afterward.

Of all the mosques built during the Mughal period, the Wazir Khan Mosque possesses the best mosaic tile work. The passages from the Quran are presented on the walls as magnificent calligraphy works. Floral patterns and elaborate designs are also present, evoking a sense of calm and spirituality.

The building’s distinctive blend of calligraphy, geometrical shapes, Persian themes, and floral patterns lends it an undeniable air of majesty and wealth.

How to get there

The mosque is easily accessible as part of a three-stop tour that includes Delhi Gate, the renowned Emperors’ public baths (Shahi Hammam), and Lahore Fort. You can either hire a guide in Lahore’s walled city or go on an unguided tour, in which case there will be numerous signboards directing you to the mosque.

There is no admission charge to Masjid Wazir Khan. However, the guard who holds your shoes outside the mosque may charge you PKR 20. You will feel a greater sense of spirituality once you enter the mosque. Watch history unfold in front of your eyes and savor every moment of your visit to the Wazir Khan Mosque.