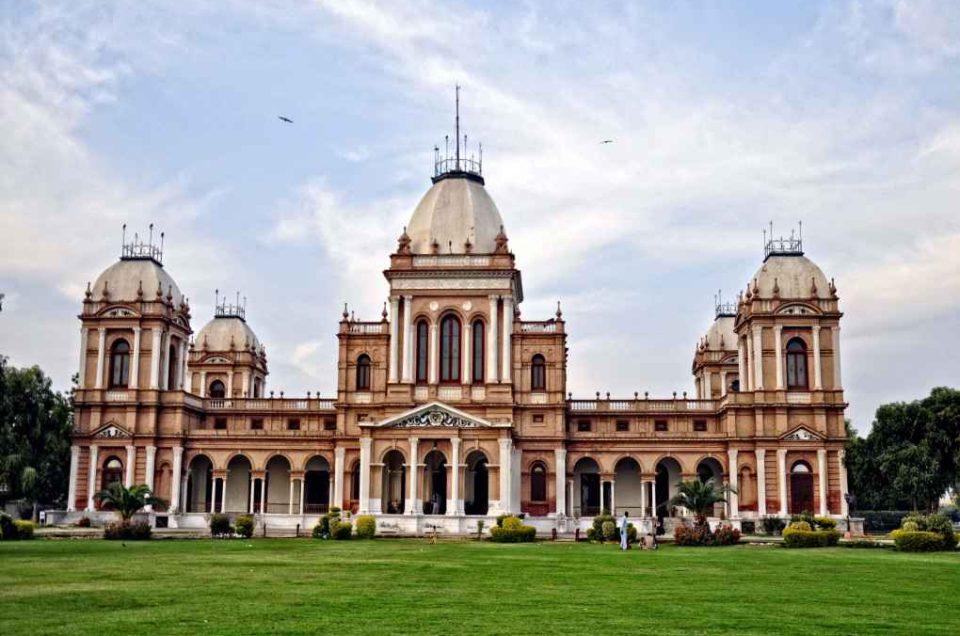 Pakistan is quickly becoming a tourist’s heaven, as more and more inland and foreign visitors are attracted to the unending list of the most beautiful tourist spots, hill stations, resorts, places of historic importance, and cultural diversity.

The Noor Mahal is a princely palace in Bahawalpur, South Punjab (pre-Pakistan Rajputana State). The Nawab of Bahawalpur, Sir Sadiq Muhammad, became popular as the Shah Jahan of Bahawalpur because of his deep love of beautiful architecture. This most magnificent royal palace was built in 1872-75. This history-based palace is visited by thousands of inland tourists and foreigners seeking historic places, cultures, and architectural landmarks of beauty and grandeur.

How to Reach the Noor Mahal

There are four ways to get to Bahawalpur from other cities in Pakistan; they are by plane, taxi, bus, or car. Bahawalpur has an airport, taxi stands, and bus terminals. Bahawalpur can also be reached via Pakistan Railways, as Bahawalpur railway station is a major station on the Peshawar-Karachi main railway line.

The distance from Bahawalpur downtown through Cantonment is 4.5 kilometers by road, which takes about 10 minutes by car or taxi via Quaid-e-Azam Avenue.

From Bahawalpur Airport, it takes 15 minutes to travel the 7 km via Airport Road.

From Multan by road via Lodhran (98 km) to Noor Mahal takes 1 hour 40 minutes.

Bahawalpur is famous for many grand palaces, including Noor Mahal, and other magnificent ancient structures like Derawar Fort, Darbar Mahal, Sadiq Ghar Palace, and other tourist attractions for desert lovers. Tourists are also attracted to observing old architecture and the ethnic beauty of this region, especially the Cholistan Desert. The Desert Safaris and four-wheeler rallies have become a regular event when people from all corners converge here.

The Royal Family of Bahawalpur has an impressive footprint due to its influence over the construction of some of the most magnificent structures in this region. Such man-made structures inspire awe among historians, architects, students of art, and sightseers. Those who visit Bahawalpur once are attracted to returning to these places many times again. The Noor Mahal is among the best and a hidden gem of Bahawalpur.

If you wish to learn more about the Derawar Fort, click: https://guidetopakistan.pk/2022/02/28/travel-guide-to-derawar-fort/

The Royal Family of Bahawalpur were the Nawabs of Rajputana State in India. Current day Rajputana is current day Rajasthan in India and Bahawalpur in Pakistan, including the Cholistan Desert bordering India. The Nawab of Bahawalpur, Sir Subha Sadiq Muhammad Khan IV of Rajputana State, built this grand palace for his wife Noor. However, his wife stayed at this beautiful palace for one night. The legend says her decision not to stay here longer was due to this grand palace being constructed near the old Basti Maluk Shah graveyard in the neighborhood. Some believe it was for certain undeclared danger or security reasons that the Nawab’s family was taken away from this palace. After that, the palace was used to lodge state guests and noble friends and families of the Nawab. History shows that cabinet meetings and State Court proceedings were carried out at the premises.

At the time of the India-Pakistan partition in August 1947, the state of Bahawalpur became independent. However, in 1956, Bahawalpur formally became part of Pakistan. The Palace was then handed over to the Pakistan Auqaf Department in 1965. The Nawabs of Bahawalpur retained their titles as Nawabs. However, they refrained from the state affairs of Bahawalpur after the merger with Pakistan. Later, in 1971, the Pakistan Army took the Noor Palace on lease and later purchased it for a handsome amount of money.

The Archeology Department of the Government of Pakistan declared Noor Mahal as a protected monument in the year 2001. As such, they opened the palace to the public. Then, few were aware of the beauty and grandeur of one of the most beautiful palaces in Pakistan. Colleges and universities arranged their student field trips to this historic asset. Those who were interested in capturing royal charisma arranged photo shoots at the premises, showcasing the royal interiors and the lavish lawns surrounding them. Bahawalpur carries a rich cultural heritage, and the Noor Mahal may be a most well-kept palace of all the palaces in the city.

The British engineer, Henan, was assigned to design the building and oversee the construction. The foundation was laid in 1872. A huge amount of money was spent lavishly on the construction.

The work on the original Noor Mahal was completed in 1875. The design followed the Italian chateau-style or Greek influence, with Islamic architectural arches and a European church-model high-rise ceiling in the main hall that is two-story high and colorfully decorated. Construction materials from Italy and England were arranged and used in building the Noor Mahal. For good luck, gold coins were buried under Noor Mahal in its foundations. After the turn of the century, the then Nawab of Bahawalpur, Muhammad Behawal Khan, constructed a masjid (mosque) on the premises that borrowed its design from the popular Lahore Aitchison College mosque.

The Noor Mahal spreads over more than eight kanal. The Palace is furnished with thirty-two rooms. Fourteen of these rooms are in the basement. There are five domes and six verandas, stairs, and other structures that speak of craftsmanship.

The Interior of Noor Mahal

The floors were laid with mosaic and the ceilings were ornamental with large crystal chandeliers. The royal Nawab family of Bahawalpur can be felt in everything seen there. Western artwork has been displayed on the walls. One long wall is decorated and lined up with portraits of the Nawabs. The palace had gilded furniture that was intricately carved by hand and decorated. The carpets, curtains, furniture, fixtures, guns, swords, and ornaments all radiate the noble class and taste of the royal family. The most beautiful may be the Darbar Hall. Only princes could adorn such sofas and seats as those placed there.

The Noor Mahal has a big library of books and records. Two classic cars of classical value are on display for the visitors to get inspired. Visitors should spend time viewing the museum that displays precious ornaments, antique swords, decades-old muskets, and artifacts that remained in use at the palace. There is also a museum and a well-maintained public park. The front park has seating arrangements, entertainment, and snacks for the visitors.

The Noor Mahal Palace facility is also used as a state guest house for holding state durbars and meetings with foreign delegations. Gulzar Mahal and the Darbar Mahal are other palaces in Bahawalpur. However, these two are not open to the public.

The Noor Mahal is open to the public between 9:00 am and 10:00 pm daily throughout the week. For a gala party, like a wedding ceremony or other gatherings, the Noor Mahal Marquee Complex can make arrangements. The Marquee Complex management offers seating, food, bouquets, a stage, and other related ceremonial arrangements like music and bridal care.

There is a minimal entrance fee, which is charged before entering the Noor Mahal Park. Visitors can also purchase mementos from many shops where souvenirs, traditional regional artwork, and handicrafts are also available.

COVID-19 protection at all public places should be adhered to as prescribed by the government from time to time.

Several hotels are available within two miles of the Noor Mahal palace and further spread over the Bahawalpur City and cantonment area.

All in all the Noor Mahal is a glorious place to visit, filled with beautiful art and magnificent architecture. It is a sight to behold and a place you must visit with your friends and family to learn more about the rich culture of our forefathers and the life they led in their times.