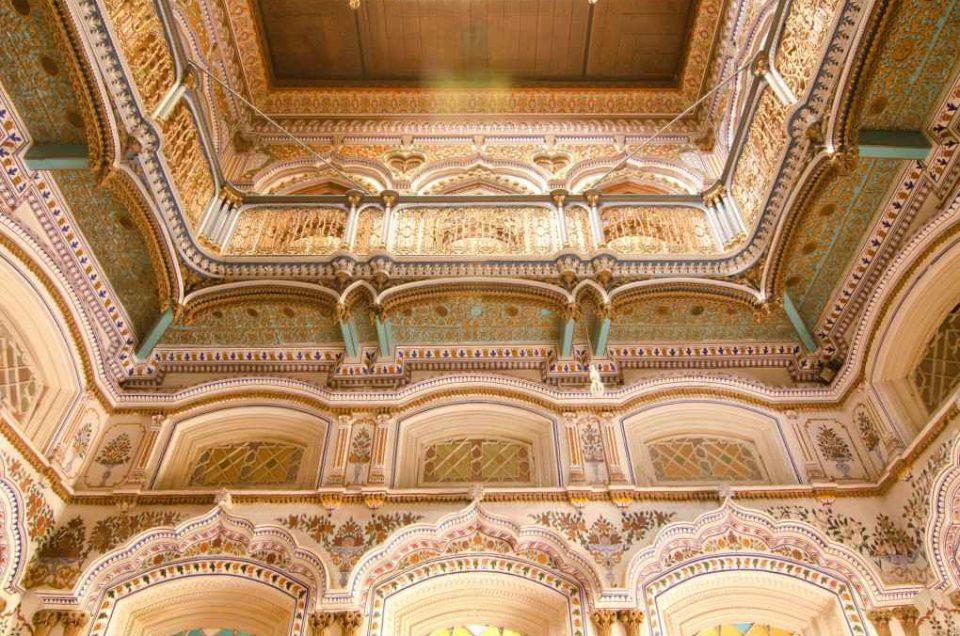 Pakistan has loads of tourist attractions to offer, including snow-capped mountains, rivers, lakes, deserts, and historic cities of eminence. Inland travelers are fascinated by the treasures they encounter in the beauty of the landscapes: man-made structures, forts, places of worship, palaces, and mansions. Punjab, like all the other provinces, has its own unique cultural variety. Ethnic diversity dates back to centuries-old traditions. The craftsmanship displays deep-rooted folklore and unique awe from the dynasties of this region.

The Omar Hayat Mahal is one sample of the traditional influence that catches the eye. The wooden structure with its handcrafted design on the façade, doors, windows, cornices, pillars, walls, and ceilings, and unique architectural style is almost two centuries old. The building was constructed during the British era in India. It took the builders over twelve years, between 1923 and 1935. Those of us who appreciate art, handicrafts, and structural beauty will find the Omar Hayat Mahal a treasure to remember.

The Ancient City of Chiniot

The early origin history of Chiniot is not available. However, its name is tagged to an ancient king’s daughter named Chandan, who was bewitched by the beauty of this area and its woodlands. A settlement was decreed. The original name for the town was Chandaniot or Chandniot which turned into the softer common title of Chiniot with time. During the Mughal rule, Chiniot was part of the province of Lahore. The famous artisans of Chiniot were employed in the construction of the 17th-century Shahi Mosque at Chiniot. They also decorated the Wazir Khan Mosque in Lahore and India’s most world-renowned Taj Mahal. During the British Raj, there was a population of a mere, 12000 in Chiniot city. The Omar Hayat Mahal was built for a wealthy businessman who made his fortune in Calcutta and settled in Chiniot.

The Omar Hayat Mahal is located in Chiniot, a city in Punjab now famous for its handicrafts, wood-carving, furniture, and related arts that add color to our lifestyle and belongings. Besides other commodities, Chiniot exports hand-carved wooden furniture for the home or office. Wooden door-frames, ornamental windows, mehraab for mosques and mansions, and anything that can be carved out of wood for inland and overseas buyers on special orders too. The customers return for more.

Punjabi is the local vernacular language. Chinioti citizens also speak Urdu, which is the national language. Most people understand English in the city.

How to Reach Omar Hayat Mahal & Its Location

The Omar Hayat Mahal is located in Chiniot City. The town is spread over a 10 square kilometer area at the junction of the Lahore-Jhang and Sargodha-Faisalabad roads, about 160 kilometers from Lahore and about 40 kilometers from Faisalabad. The crossing is named Kalema Chowk. Locals would happily guide you for directions when required.

The River Chenab flows near Chiniot, the city being on its left bank.

Chiniot can be reached by road and by train. The nearest airport is the Faisalabad International Airport (LYLP/OPFA), which is 50 km by road from Chiniot.

Road distances and estimated times from a few major cities in Pakistan are given in the table below:

History of the Wooden Mansion

The Omar Hayat Mahal is also popularly known as the Gulzar Mahal of Chiniot. Sheikh Omar Hayat was the proud owner who built this attractive structure in 1923-1935. Omar Hayat was a Chinioti successful businessman in Calcutta. He died a few months before the completion of this beautiful 5-story gem of a man-made creation. The façade depicts the outstanding style of the woodwork in the unique Chinioti design. The interior is intricately carved and etched, which is extremely beautiful to the eye.

Omar Hayat’s son, who got married in 1938 at this outstanding mansion, was found dead on the next day of his wedding. It may have been due to the huge amount of coal burned for the wedding festival within the building premises, which generated deadly gas. Gulzar had married against the will of his Sheikh family. Rumors were abundant. As disaster struck, soon after, overwhelmed by the grief, Sheikh Gulzar’s mother also died. Superstition took over the other members of the family, who vacated this palace-like home to move elsewhere.

Sheikh Omar Hayat’s bad luck became the talk of the town. The owners abandoned the 5-story palace-like mansion, as only servants stayed behind for a year or two. Gulzar and his mother were buried in parallel graves in the first-floor courtyard.

An organization named Anjuman-e-Islamia opened a school at these premises in 1940, since the legitimate owners did not put a claim to it after it was abandoned. About 8 years later, Sheikh Muhammad Amin started an orphanage in 1948, but that was also shifted in 1950. The building remained uninhabited. Local thieves stole some decorative collectors’ items and secretively sold them in adjacent cities. The structure was not looked after and became dangerous due to decay. In 1970, the top levels were removed. Another level was also abandoned in the year after severe rains. The government took over the building under its control in 1989. A full year’s worth of repairs was undertaken as the community raised funds for this purpose.

The Omar Hayat Mahal is being used as a library and cultural center. People from near and far visit here to see the beauty of this architectural marvel of the Mughal style and grandeur.

Architectural Significance of the Mahal

Sheikh Omar Hayat employed the best craftsmen and artisans in Chiniot to build a magnificent dream house for his family. Work was carried out day and night for more than 10 years, as the special style of carving wood used, was quite laborious and beautiful.

Two of the most renowned royal master woodcarvers employed their best skills and produced what can be appreciated by all who witness the beauty of this monument of national heritage. The construction is mainly of carved wood, and the wall plaster is molded into a decorative architectural masterpiece that adds beauty to the mansion. The Fresco painting was praised by the British in the papers.

The Qabza mafia-illegitimate occupiers took over this magnificent palace and took away all that they could. Doors, altars, window panes, and valuable carved wood were extracted by such unlawful groups for easy money. The magnificent treasure of national heritage was losing its glory. The Deputy Commissioner of Jhang took notice and removed the encroachments. The government took ownership. Repairs were undertaken through fundraising.

Conservation of the Most Beautiful Historic Remnant

The Omar Hayat Mahal may probably be the last Mughal-style architectural treasure. The carvings and stucco work across the whole structure are unique. The doors, windows, oriel windows, or Shah-Nashin Indian style jharokhas, the deeply traditional stairways, balconies, magnificent terraces, and a delightful interior all add up to play magic on the visitors. The front face of the building is decorated with bricks and marble in artistic hues that only royal princes deserved to own this palace. Out of the original 5 floors, only 3 floors were in good condition. The municipal committee has discontinued bearing the expenses of the subscriptions for the library. The top floors remain dilapidated and require serious repairs.

There are several decent hotels and restaurants in various price ranges in Chiniot. A few inns are also available for frequent businessmen who visit Chiniot regularly, plying from other cities. The nearest towns, over an hour’s distance by road, are Sargodha and Faisalabad, where equally presentable accommodation may be available.