The Tomb of Shah Rukne Alam 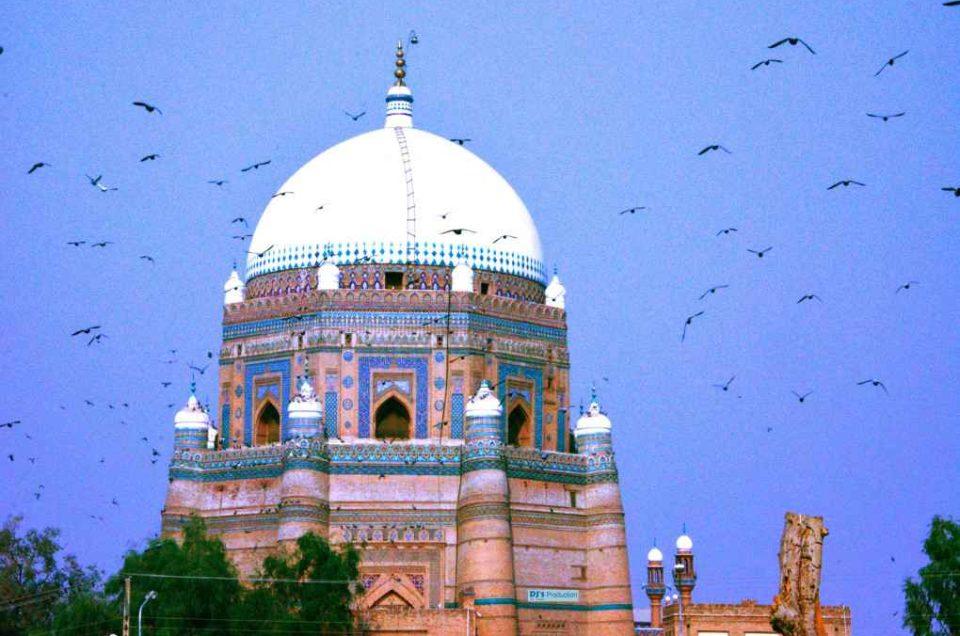 Multan is an ancient city in South Punjab, Pakistan. Multan was an important center of trade during the Islamic era of India. Also, being the city of mystic Sufis earned this town the name “City of Saints.” There are many shrines and tombs spread around Multan, its suburbs, and adjacent towns. Such shrines and tombs are several centuries old and draw interested visitors from far places within Pakistan, India, and Central Asia.

The Tomb of Shah Rukne Alam, built between 1320 and 1324, is one of the most popular tourist destinations in Pakistan due to its unique architecture. The monumental value adds to the shrine’s being one of the best and most beautiful places in Pakistan. The tomb is a mix of a fort and a tomb, with a decorative interior of glazed ceramic tiles and patterns. Such craftsmanship has become the symbol of Multan’s cultural heritage. It is on UNESCO’s World Heritage List. Hundreds of thousands of pilgrims and tourists visit this shrine throughout the year. Especially during the annual Urs celebrations, people from the whole of South Asia can be seen here, some with religious bindings and others for the intrigue of cultural novelty.

The Location of the Tomb and Shrine

The saint has a huge following in the contemporary era, and his pilgrims commemorate his death through a yearly Urs festival. According to tradition, the custody of the shrine and mausoleum stays with the saints’ nearest family. The current responsibility of this position rests with Shah Mehmood Qureshi as the Sajjada Nasheen (an honored chamberlain). He looks after all the affairs of the shrine as a successor. Shah Qureshi is also a respectable and prominent political figure and is the Foreign Minister of Pakistan under the current government.

The mausoleum is a great tourist attraction due to its unique structure, family ancestry, and spiritual succession from Al-Qureshi Asadi Al-Hashmi Suhrawardi. It is a strictly Sunni Muslim descendant traced to Al Ghazali, Junaid Baghdadi, and Ali-ibne-Abi-Talib. They were among the most influential Muslim scholars of their time and are deeply revered to this day. Besides, the tomb’s unique structure has significance for students of the history of the subcontinent, architecture, Sufism, and tourists of all kinds who visit the shrine.

The annual Urs is also a splendid event for those who are touched by Sufism and spiritual ecstasy. Built on top of a high dune that adds beauty and grandeur to the landscape, the tomb is visible from more than 30 kilometers away. Naturally, those who have not visited this grand structure are attracted to seeing it for themselves. And once bitten, they return to this gigantic monument of national heritage and the attractive landscape of Pakistan.

Architectural Heritage of the Tomb of Shah Rukne Alam

The tomb was built in an architectural style that dates back to the pre-Mughal era. The unique aspect is that it has been built in the form of a small fort with dome tiers, one on top of the other. The structure dates back to 1320 and has lived through centuries with magnificent grandeur. The style is even older than the Tughluq architecture in Delhi, India.

The British ruined it almost completely in the year 1848 during its siege. Soon after, the local Muslims restored it for its religious significance and reverence. In the year 1970, the Pakistan Auqaf Department repaired and renovated the structure completely. The interior of the mausoleum was repaired with fresh brickwork and paved with new glazed tiles by the specialist Kashigars (tile-fixers) of Multan. The tomb has been placed on the tentative list of UNESCO World Heritage Sites. The Darbar Mausoleum is 52 square meters internally, and an octagon built above it carries the half-circular dome. Each of its eight corners has buttresses that show an element of the Tughluq military-style structure. It resembles the Suhrawardi tombs. There are three entrances, and the Mehraab faces westward.

The main entrance has been shifted to the east to align it with Makkah, under Islamic inscription. The mausoleum structure has three tiers; the first has a diameter of 15 meters, and the thickness of the walls is four feet. Eight small minarets rise in each corner of the octagon and support the second-tier octagon. Another tier rests on top of the second tier, and a dome is formed over it. The diameter of the dome is 15 meters. The complete structure is 35 meters tall and is visible from afar. The dome is white. The top of the dome resembles a temple. Red bricks are used in the structure and the wood has turned dark due to aging for centuries. Wood carvings and bricks with carvings are attractive. The Mehrab is also made of carved wood. The marble sarcophagus is not in the exact middle and is surrounded by 72 graves of Shah Rukne Alam’s family members equal to the 72 martyrs of Karbala.

Visitors to the shrine of Shah Rukne Alam can easily find appropriate hotel accommodations in Multan city. Other nearby towns are also accessible by road. The guests of the annual Urs may be offered event-based accommodation by the organizers during the special days. Most pilgrims prefer to stay the night within the demarcated precincts. The area is made safe and secure for pilgrims and visitors alike. Law and order are maintained.

The Tomb of Shah Rukne Alam
×