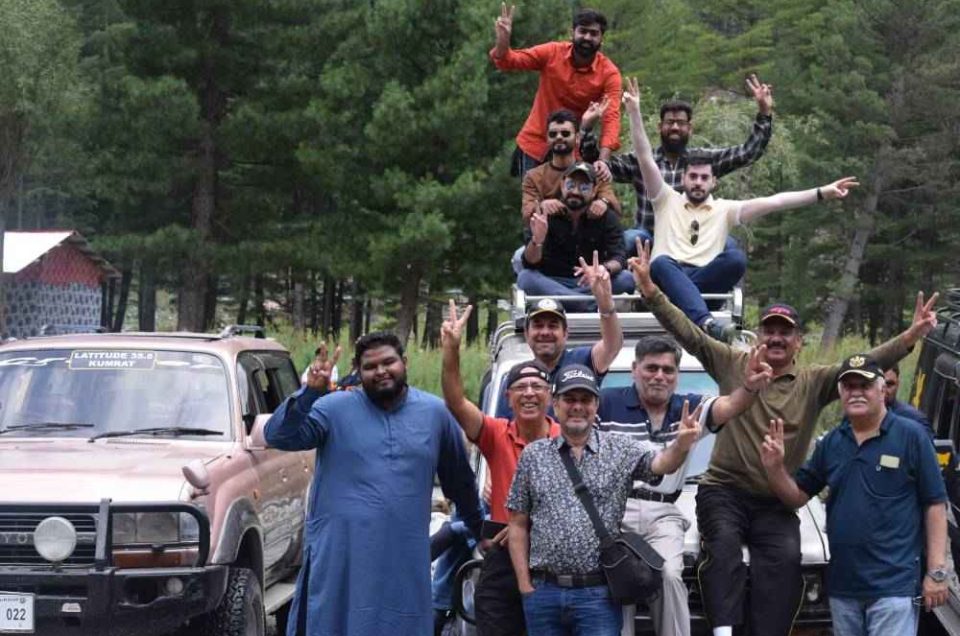 Words cannot describe how much I loved the four days I spent in Kumrat Valley, but I will still try to pen down my experience to share it with you. In simple words, I had the most adventurous yet soulful experience that I will cherish for a lifetime. I planned this trip with Guide to Pakistan, my go-to travel guide and planner.

And the best way to see how much I enjoyed it is to visit Guide to Pakistan’s Instagram Stories.

Stunning natural beauty, deodar forests, incredibly lush green mountains, the river Panjkora, and mouthwatering cuisine are just a few things you can expect when visiting Kumrat Valley. Most significantly, it’s home to the friendliest people I’ve ever encountered while traveling. It makes sense why more and more people are interested in visiting the Kumrat Valley!

Kumrat Valley –  A Heaven On Earth

One of Pakistan’s most stunning and undervalued regions is the Kumrat Valley. It is located in the Upper Dir District of Khyber Pakhtunkhwa, the province of Pakistan. Thall is the town that is nearest to the valley. It is the starting location for journeys to Kumrat Valley, which is around 45 kilometers away. While other Pakistani tourists are mainly unaware of the remote valley, it is well-known among local tourists in KPK.

The stunning deodar forest and the Panjkora River flowing through Kumrat valley make it more desirable for foreign and local tourists.

Islamabad to Kumrat Valley, the Itinerary

This itinerary follows my 4-day adventure in Kumrat Valley, starting in Islamabad. The tour was arranged by the Guide to Pakistan, which provides tour & travel services for an exceptional and treasured travel experience.

The Kumrat valley’s distance from Islamabad is about 10 hours, or roughly 370 kilometers (230 miles). The M1 (Islamabad-Peshawar Motorway) and M16 (Swat Motorway), both leading to Chakdara, are the routes between Islamabad and Kumrat. Moreover, the N45 highway, Dir Road, and Kumrat Road are common routes from Islamabad to Kumrat Valley.

The reasons we did not mind wake-up calls at 4:00 a.m. were the excitement of visiting some amazing places and the anticipation of having a great time traveling. As the GTP team had already instructed us to pack some extra layers to be prepared for the cold weather at Kumrat, I packed warm clothes and essentials in my backpack.

The organizers planned the whole trip so carefully that I did not regret not packing anything other than the list.

We were instructed to reach the GTP Head Office at 6:30 am, so the most anticipated trip of our organization would start as per plan. Once we all arrived at the GTP head office, we loaded our luggage onto luxurious transport, again arranged by GTP with great care and planning. Buon Viaggio! We left Islamabad for Kumrat Valley at around 7:00 am.

We set out on our unforgettable voyage as a group of around eighteen hilarious and exciting individuals. From the start, I knew it would be a tremendous team-bonding trip for us as an organization. With elevated serotonin levels, we were ready to feel all the excitement, thrill, and fun that awaited us.

“Wherever you go, go with all your heart.”

We drove via Swat Motorway and reached Tahir Khan Restaurant (famously known as TKR) at 9:45 am for breakfast. It is located at Karnal Sher Khan Interchange, opposite Swat Motorway Toll Plaza, Swabi. Organizers had arranged a scrumptious breakfast. The rain at this perfect moment doubled the taste and excitement for all of us; without a doubt, everyone enjoyed it a lot.

Splendid Views Along The Motorway

At 11:00 am, we accelerated again toward our destination. After four hours of consecutive driving, we left the Swat motorway and entered Chakdara, passing through small towns and rapidly changing landscapes. We could see the River Panjkora now.

As a small tip for photography enthusiasts, I would suggest booking a window seat or shifting to a window seat to capture breathtaking scenes. If you get lucky like me, you’ll have the chance to catch these scenic views in the rain.

At around 3:15 pm, we reached the Shelton Hotel and Restaurant for lunch. Another pit stop for us with tasty food to devour, but we all agreed on ordering Kabli Pulao, Biryani, and soft drinks.

The driving duration from Chakdara to Kumrat Valley is generally 6 hours, or about 177 kilometers (110 miles). The road is bumpy, but the view makes up for it. Even the bumpy roads couldn’t make us tired, and everyone was dancing to different music tracks. The lunch break energized everyone to enjoy the activities and music on the coaster once again.

Moving on the N45 road, we passed Timergara, Barron, Toormang Wari, Shib Abad, and Darora and finally reached Baabe-e-Kumrat at Chutiatan. We had a 15-minute stay at that spot, and then we moved again from Baabe-e-Kumrat to the Kumrat Valley via N45/Dir Road.

Note: The Panjkora River, which runs alongside the route for most of the distance, adds scenic and adventurous elements to the trek. One of the well-known sights in Kumrat is the Panjkora River.

At 9:00 pm, we finally reached Thall Bazaar, where our tour planners booked jeeps to cover different routes to our hotel. The road was extremely bumpy, and only jeeps could have made it comfortable and safe for us.
After 45 minutes of a venturesome bumpy ride in the dark mountains where the river burbles along its bed. We reached our hotel “Latitude 35.5” at 10:00 pm. The hotel is located in a very peaceful location along the riverside and mountains.

After an hour’s rest, everyone came out for dinner under the open sky in fantastic weather. The dinner arrangements were pretty good, and the taste was more than we expected.

As the eventful day closed, thoughts shifted to the fairly full, but exciting list of plans that lay ahead. Our tour guide quickly informed us of the itinerary for the next day’s exploration of the Kumrat Valley. We knew that the day would be busy but worthwhile in terms of sightseeing and learning more about Kumrat and its candid legends. We could feel closer to nature as we withdrew to our rooms.

Everyone had the luxury of unwinding and starting the day a bit later than planned because the day was scheduled for exploring Kumrat Valley. Breakfast was served at 10:00 am. Since the road to Kumrat is bumpy, 4×4 jeeps should be your preferred means of transportation, though it might get expensive if you have not planned.

After having breakfast, everyone was seated in jeeps, and we left for Kumrat Valley waterfall. We saw dense clouds on the mountain peaks as we traveled to the waterfall in the Kumrat valley. We took this opportunity and added a few more clicks to our gallery.

Many people are unaware of the Kumrat waterfall, making it a hidden gem. The Kumrat valley is beautiful, and this nearby waterfall adds to its beauty. When we arrived, we were welcomed by a harsh sun and the soothing sound of flowing water. Watching water fall from a rock wall into a pool was amazing. It generates a magical sound with its noise.

“There’s no better place to find yourself than sitting by a waterfall and listening to its music.”

The waterfall in this location appears to be a rock from a distance, yet you can hear the sound of water falling on rocks from a reasonable distance away, letting you know that there is indeed a waterfall somewhere between these heights.

Although Kumrat waterfall lacks depth and width, the contrast of turquoise against a clear blue sky is unmatched in terms of pure, mesmerizing beauty. Our travel partners had taken a waterfall shower. A few hours were spent there; meanwhile, everyone captured stunning photos of the waterfall.

That was our next stop. The Do Kala Chashma is well known for the rushing river that flows between the black mountains. Its name, “Do Kala Chashma,” derives from this as well. Even though the jerky drive only lasts a little over an hour, it is time well spent. The scenic route to Kumrat makes all those jerks worthwhile.

Everyone spent valuable time there and thoroughly relished it. We played cricket and badminton. We performed folk dances to local music. Towards the end of the day, we had the privilege of having evening tea with snacks. Later, we left for the hotel.

Dinner and a Bonfire with the Folks

The day ended as we gathered around the bonfire for a round of Antakshari, a singing competition where participants took turns singing. The day was tiring yet quite unforgettable. It’s time to go to bed and enjoy some quality deep sleep, even though the night was full of dreams.

Going there was primarily done to enjoy the river flow and play games like:

Lunch was offered after the photography session. The best fish of all, trout, is featured first on the menu, along with delicious veg rice, potato curry, and cold drinks. After a mouth-watering lunch, we began playing cricket, since the weather was excellent. The landscape appears more stunning, and I can still hear water splashing in my ears. It was even more beautiful because it started to rain throughout lunch.

After participating in various activities, we eventually made our way back to the hotel, where we rested briefly before dinner. After a delicious dinner, we were all prepared for the bonfire and Antakshri yet again.

The hardest thing a nature traveler has to do is say goodbye to a place they’ve come to love during the journey and let go of it. I experienced similar emotions when I prepared to leave Kumrat Valley and began packing my belongings.

After an early breakfast, we took the jeeps and reached Thall Bazaar. At Thal Bazaar, we visited the 400-year-old mosque. The Jamia Masjid was constructed out of wood and stones and still has a lovely appearance. It is located on the bank of the River Kumrat. The centuries-old mosque in Thall, which serves as the entrance to the Upper Dir district’s gorgeous Kumrat valley, is a unique architectural marvel pulling large numbers of visitors.

According to the locals, the mosque was constructed in the 19th century and damaged by a fire in 1950. A Thall native claimed that the mosque was rebuilt in 1953. We walked to our coaster after touring the mosque. Around 10:00 am, after moving the luggage, we departed for Islamabad.

We arrived at La Casa Resort Kumrat for a little rest after a three-hour trek. There, tea and refreshments were provided. Everyone listened to music playlists while we continued our voyage and arrived at our destination at about 10:00 pm.

It’s time to part ways. There is a somber and bittersweet side to traveling, a side that has made me emotional sometimes. But despite how painful and difficult it is, saying goodbye is always worth it for the memories you were fortunate enough to have while living together for a while.

So, will you go to Kumrat Valley for your next trip?