Better to see something once than to hear about it a thousand times.

As you move away towards north from Skardu Valley, the Shigar road, running through the cold desert, takes you to Shigar Valley as you cross the bridge over River Shigar. The legendry history of the valley, its architectural heritage, the simplicity and purity of its folks make it the best place to visit in Gilgit Baltistan region.

Shigar valley, the vintage point of beautiful Pakistan’s natural treasure is beyond what words can express. To put it in a nutshell, Shigar is a blend of verdant oasis, glaciers, mountains, lakes, hot springs, Milky Way, and a gazillion stars. A dream tourist attraction, Shigar valley (Urdu: وادی شگر‎), where River Shigar merges in River Indus dazzling the spectators with its youthful flow. 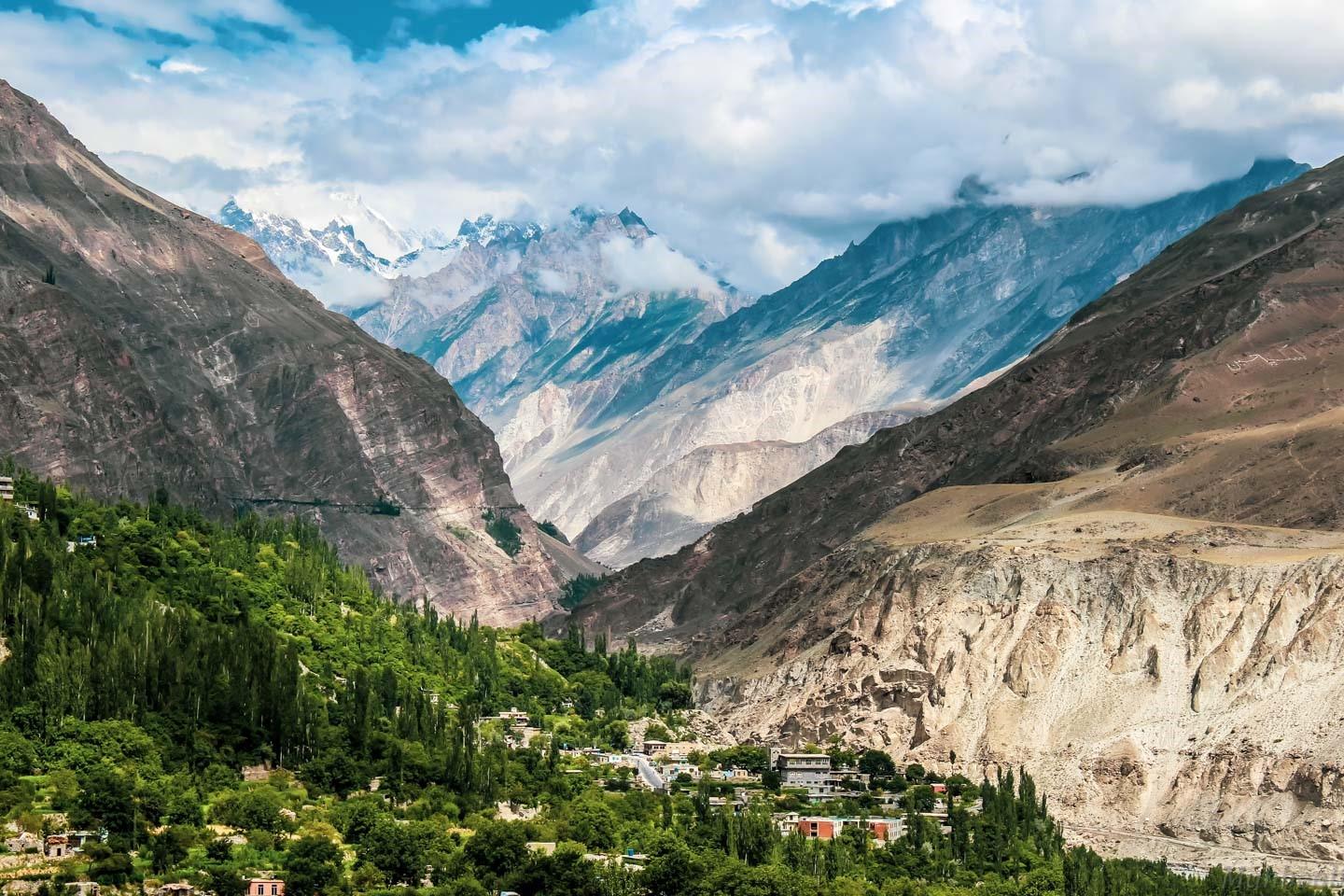 You drive through a few ravines to enter Shigar valley, the ancient kingdom of the Amacha Dynasty, sited along riverbanks of River Braldu. River Braldu springs straight from the Braldu glacier at the base of the world’s second highest peak, K-2.

Shigar valley, a part of the central Karakoram ranges, is fascinating with its stunning views, enchanting natural beauty, and majestic mountain peaks.

The higher one travels, the more beautiful and enchanting becomes the landscape. The entire valley is rich in mineral wealth and tasty fruits like walnuts, grapes, peaches, pears, and apricots.

The valley, at a distance of 52 km from Skardu, is administratively a district that stretches over an area of 170 Kms. It is a 1 hour 30 minutes drive on a jeep from Skardu via Shigar road. One-hour scheduled PIA flights operate between Islamabad International Airport and Skardu Airport, which is a 45-minute drive from Serene hotel Shigar. The hotel also offers access to both private and charter helicopters via the helipad at Shigar, which is a 10-minute drive away. 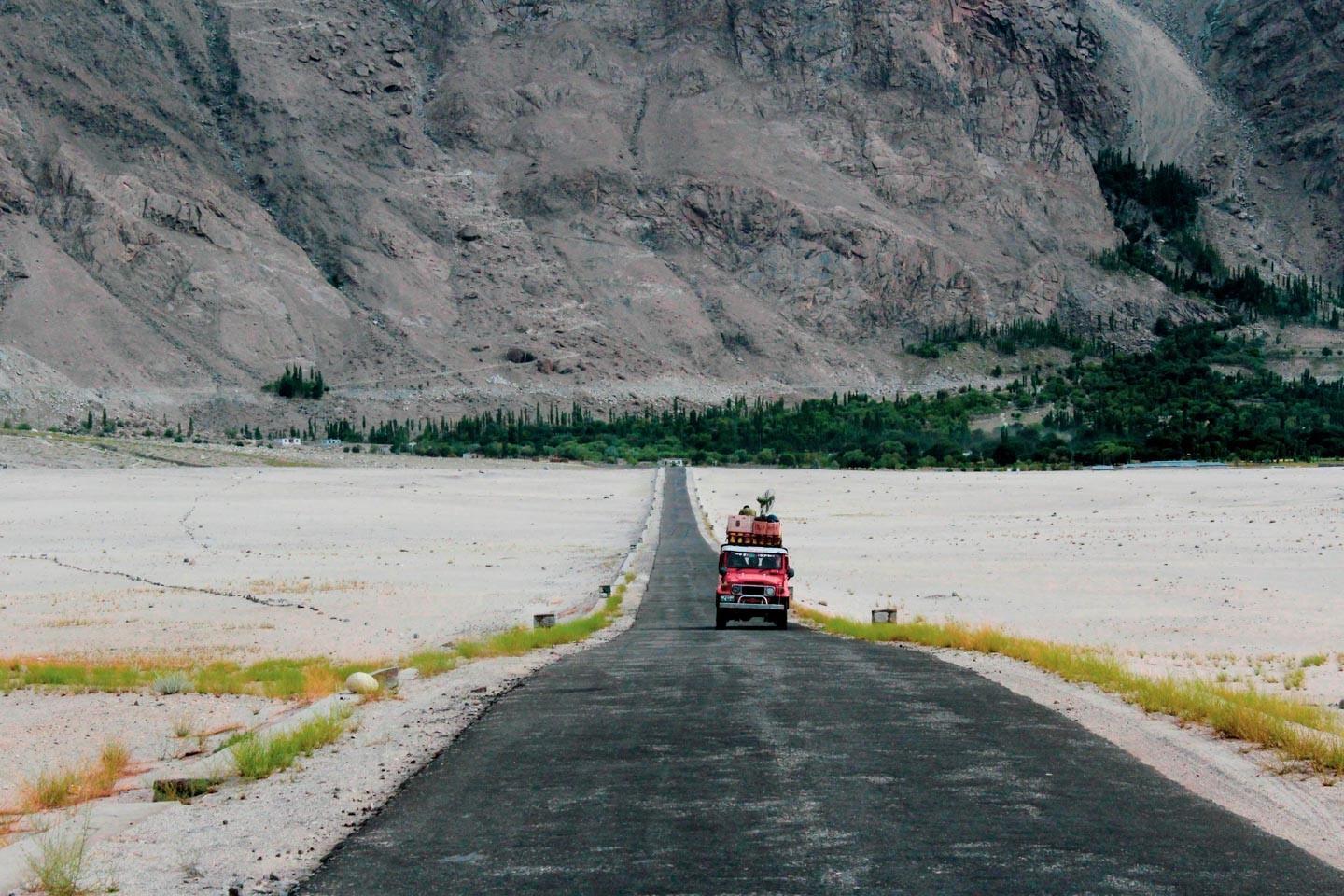 Shigar Valley has remote and largely inaccessible villages where Askole (Urdu: اسکولی‎), is the last town of Shigar valley. Still far from the massif, Askole, the launchpad for mountaineering expeditions to K -2 “Godwin Austen”, is the last village. It is also known as the gateway to World’s 14 Highest peaks known as Eight-thousanders (above 8,000m). From Askole, it is a 3-4 days trekking in dangerous alleyways, rope bridges, moraines, and glaciers to ultimately reach Concordia, the base camp.

“All journeys have secret destinations of which the traveler is unaware.”

As you drive past the Katpana cold desert during your pictorial journey on Shigar road, 20 minutes through the mountains you reach Shigar viewpoint.  The place offers a panoramic view of Shigar town and as the name suggests offers a bird’s eye view of the major part of the Shigar valley.

For hiking enthusiasts, who do not intend to trek through the riskiest treks in the Karakorum Mountain range, there are 7th-century Buddha relics and scriptures with other ancient rock carvings in Manthal near Shigar Fort, where you can reach after an hour hike along the scenic trail.

Besides Manthal, hikers can explore the hot springs in the surroundings of Shigar town.

For mountaineers, if you continue on the road beyond Shigar, the road becomes a trek along the roaring Braldu River and takes you to the last frontier of Shigar valley. Askole is the last village as you proceed for the trek to K2. From Askole, you need to trek for 3-4 days over dangerous alleys, paths, rope bridges, and moraine and ultimately over glaciers to reach Concordia. From Concordia, you can witness four of the world’s fourteen 8,000-metre tall peaks together: Gasherbrum I, Gasherbrum II, Broad Peak, and K2. 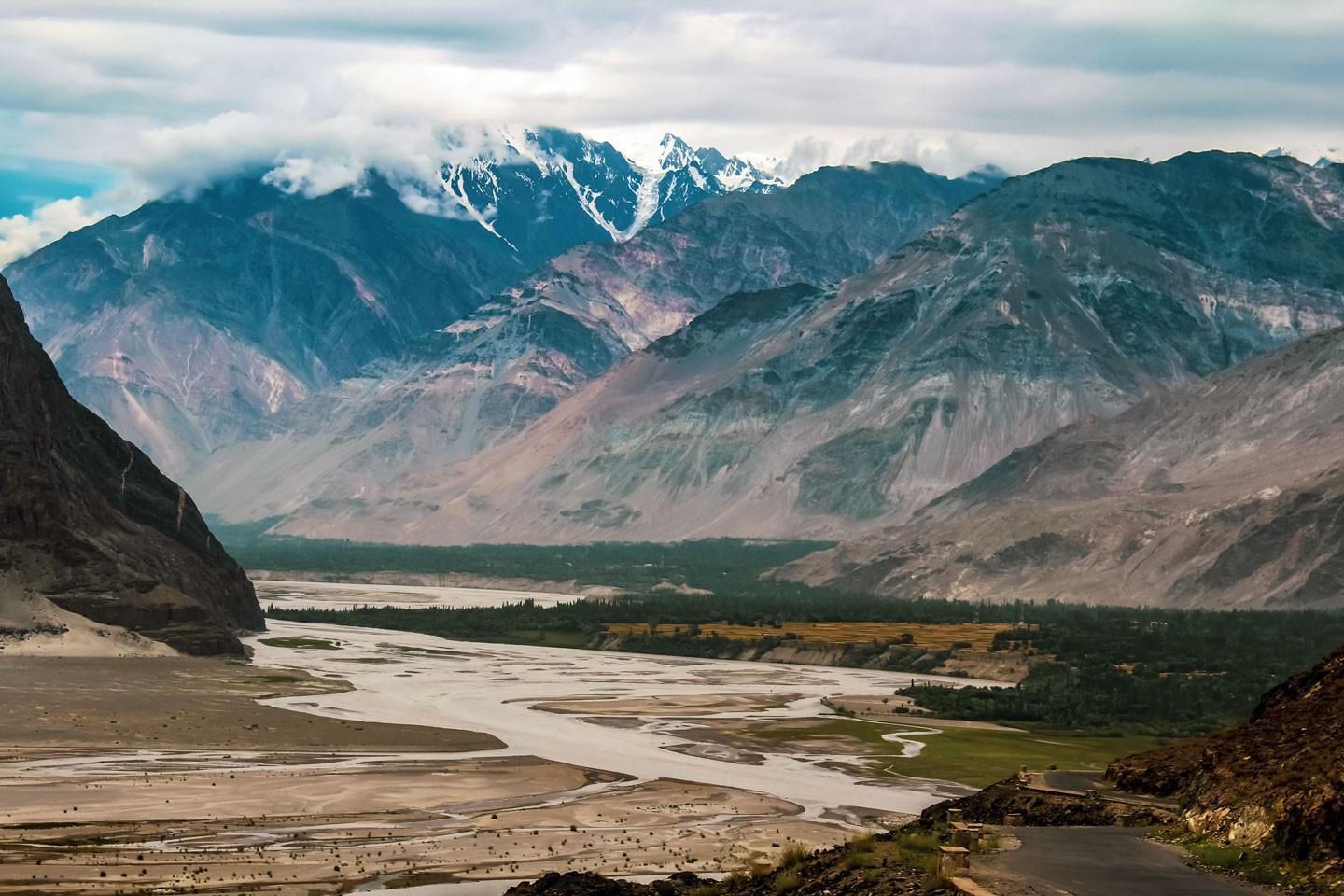 To witness the grandeur of the Himalayas and Karakorum ranges and their longest Baltoro glaciers, you need to go to Askole. It is a one-day trip from Skardu to Askole. It takes 5-days of trekking to reach Baltoro glaciers from Askole. Trekking on glacial moraine and Baltoro glacier, often termed in Urdu as “Bal-Toro” meaning the bone breaker, is a tough ordeal. Not everyone can make it.

Trekking to k2 base camp, “Concordia” takes 7-days from Askole. The trek is unique in terms of proximity to the world’s highest peaks. It also takes you to the launch pad for mountaineering expeditions to many summits, mostly the eight-thousanders.

The trek from Askole towards K2 turns northwest up the Biafo Glacier to Snow Lake. Trekking to Hisper Snow Lake is strenuous, and very few people reach here. However, the trek is distinguished for its longest glacial systems (outside polar regions) in the world. You may enjoy a mountain view as high as 7000m in this trek. Hispar trek is among the world’s 5 most adventurous treks. 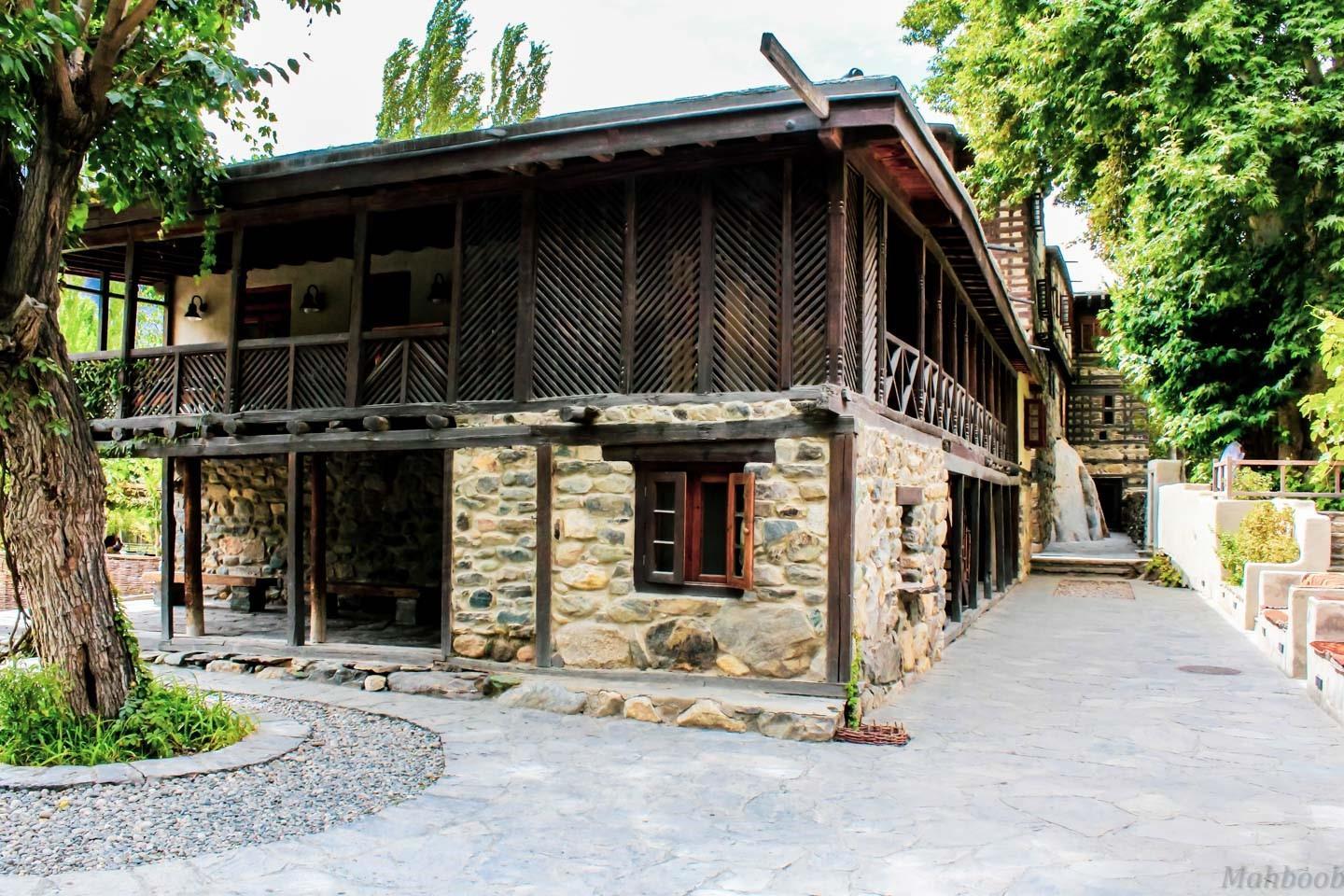 The Shigar Fort, one of the heritage sites, was built by the 20th Raja of Amacha Dynasty, Raja Hassan Khan in the early 17th-century on the bank of the Shigar River. Standing among the world’s most astounding mountain ranges, at a height of 2250m above sea level, the fort truly reflects the diversity of nature and the legendary history of the Shigar region. 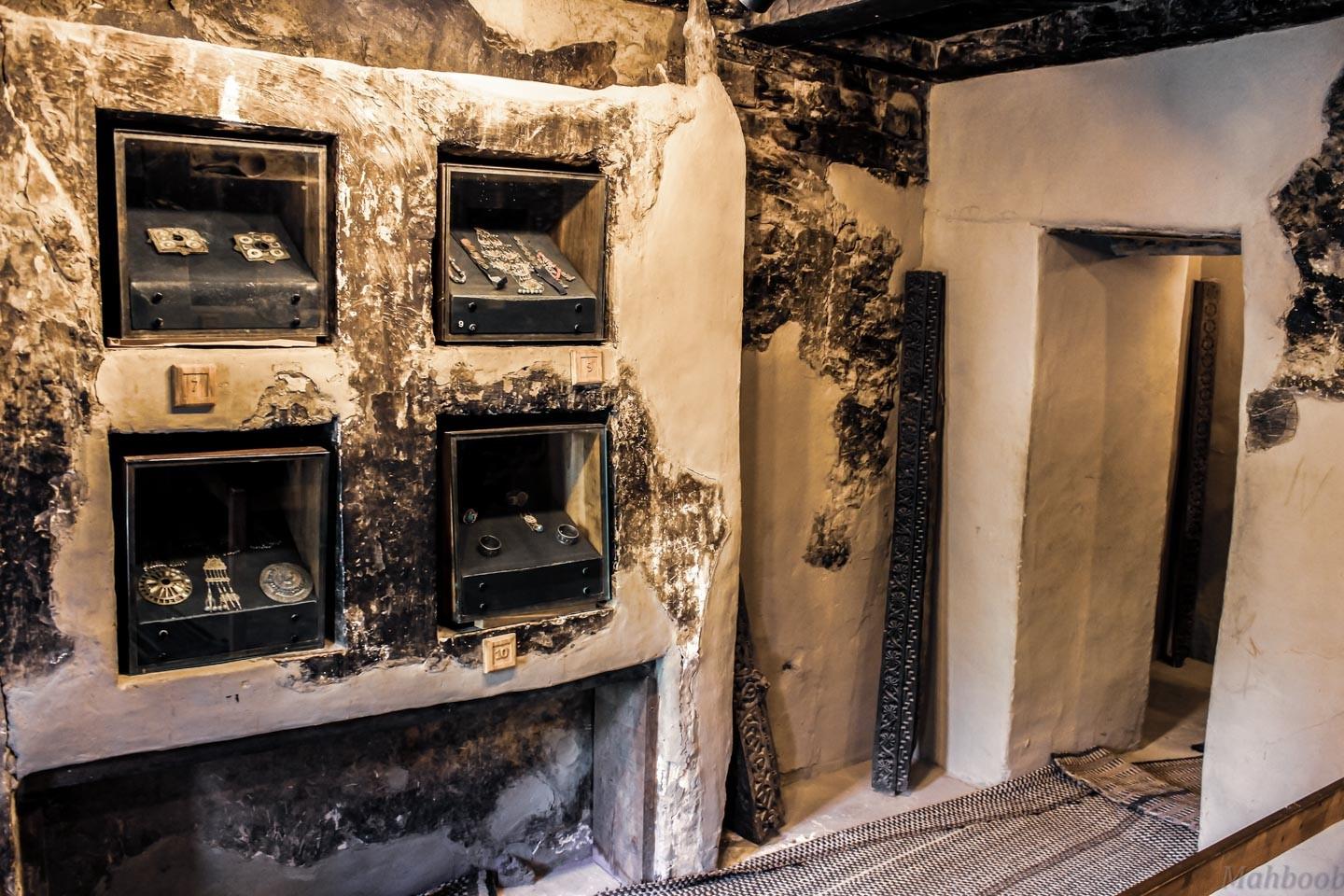 The historic fort was donated to AKCS-Pakistan by Raja Muhammad Ali Shah Saba during the early 20th-century, who vacated it because of high maintenance costs incurred. AKCS-P/ AKTC converted the fort into a heritage hotel managed by Serena Hotels, ensuring that its function remains residential. Another part of it is a museum with relics from the era gone by whereby the palace’s original aesthetics have been preserved to their best. 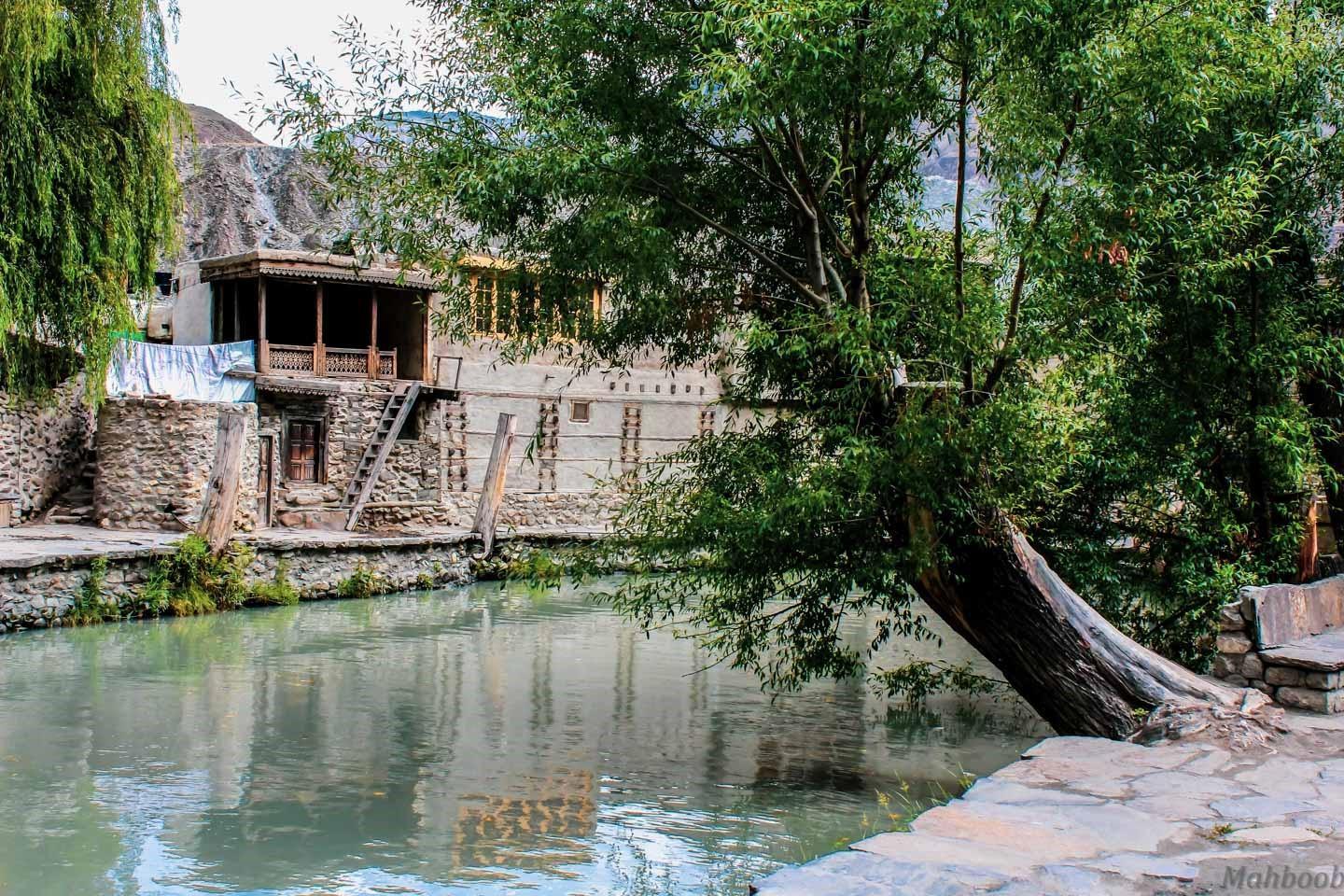 The fort harmoniously blends with its surroundings as the architectural design and construction techniques used by Kashmiri masons, artisans and goldsmiths give it a unique status in the architectural model. The fort has 40 rooms comprising the cooking areas, servants’ quarters, and a family mosque. 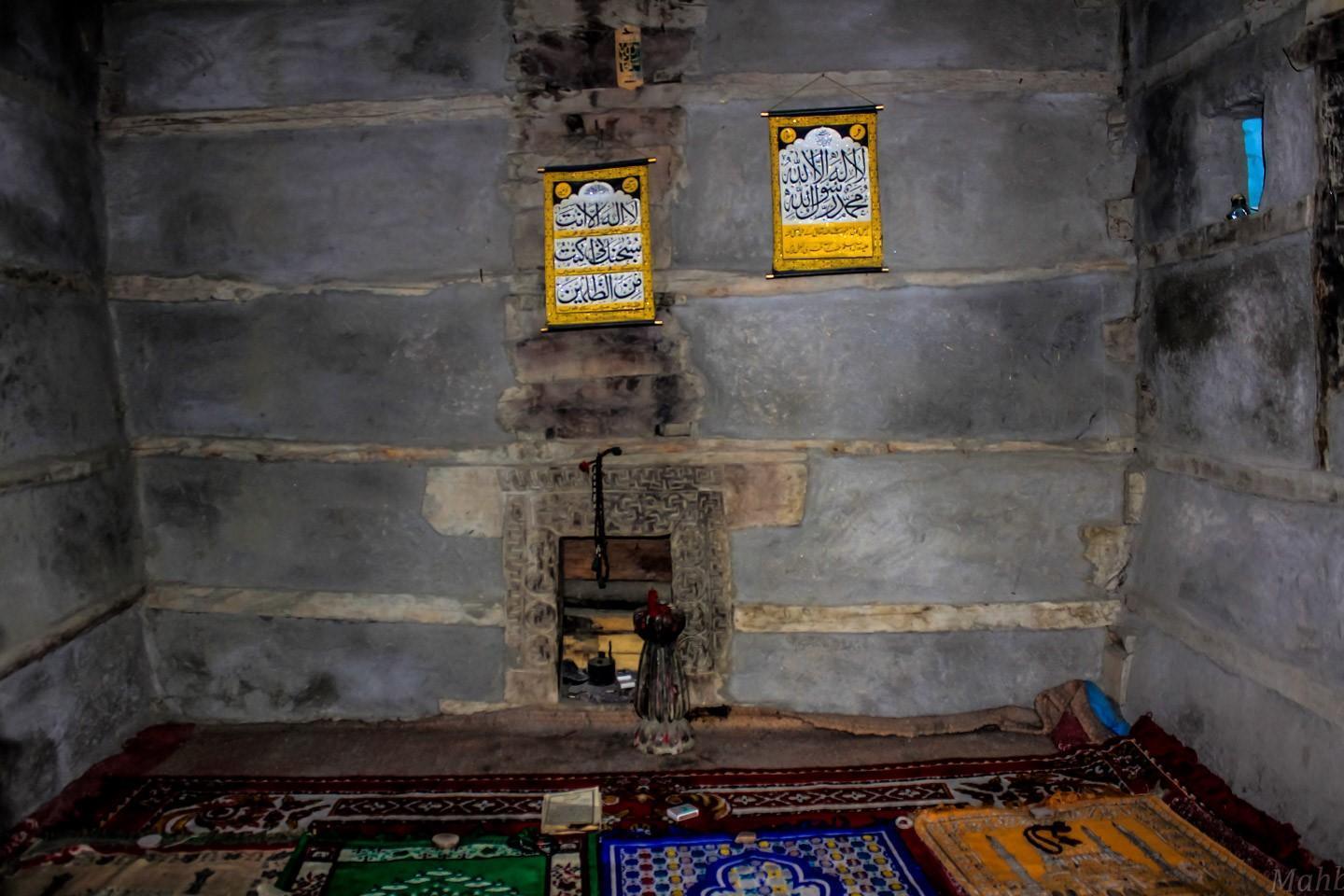 There is a Mughal-style garden immediately to the east, having a beautiful central baradari with a marble base surrounded by a pool of fresh spring water, which seems adapted from traditional Mughal baradaris.

The 16th-century Khanqa-i-Mullah, the mosque, and travel-lodge were built by Shah Nasir Tussi, who came from Tus in Persia and laid its foundations in 1602, as well. The amazing wooden work done on balconies and ceilings leaves one impressed with the masterful craftsmanship. 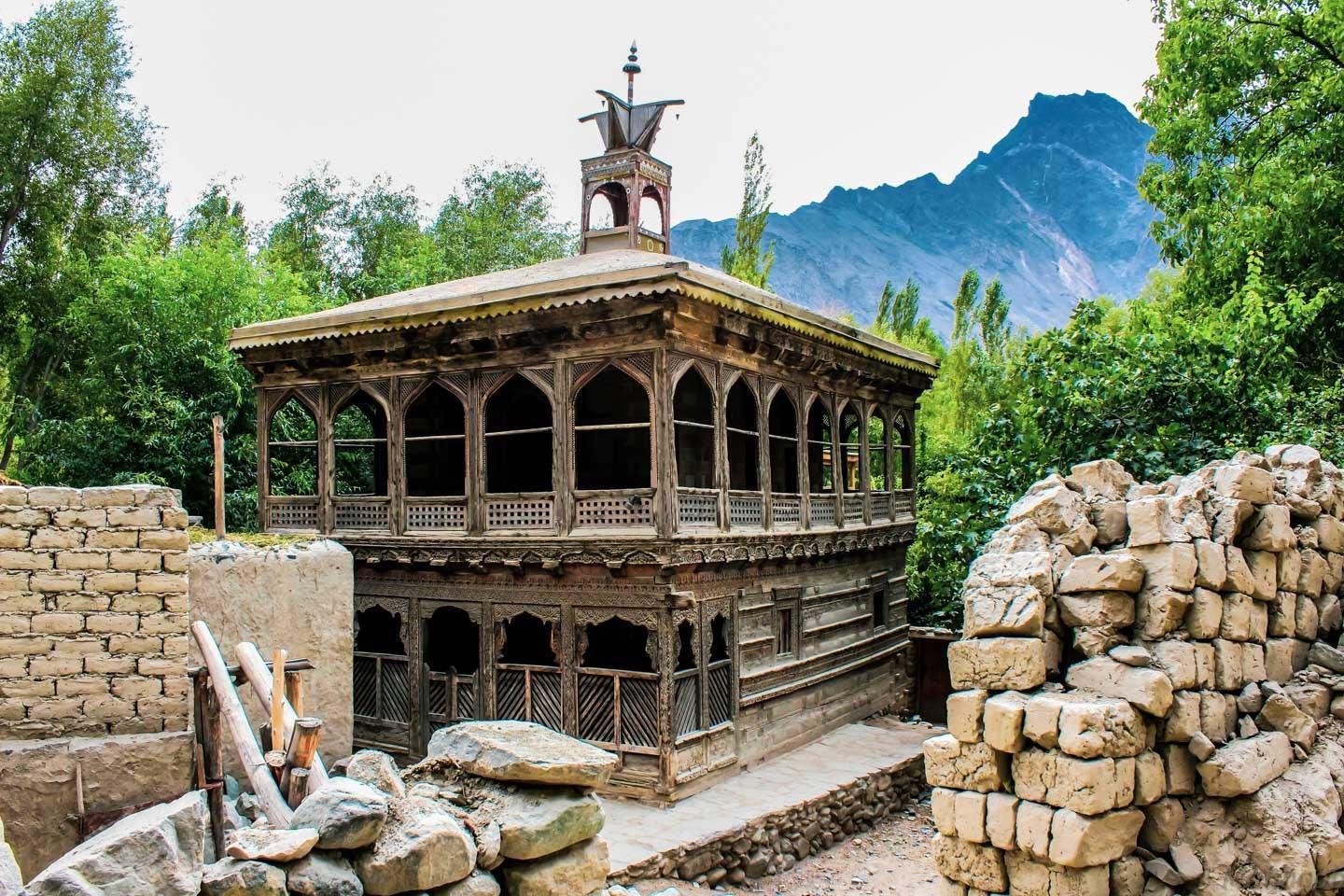 Shigar Valley is also adorned with the 14th-century Amburiq Mosque, which was awarded UNESCO-protected heritage status in 2005. This is among the oldest mosques in Baltistan. The mosque was built by the Persian artisans accompanying Syed Ali Hamdani, a traveling Persian Sufi of the Kubrawiya order, a poet & a Muslim Scholar who preached Islam in the Kashmir Valley. 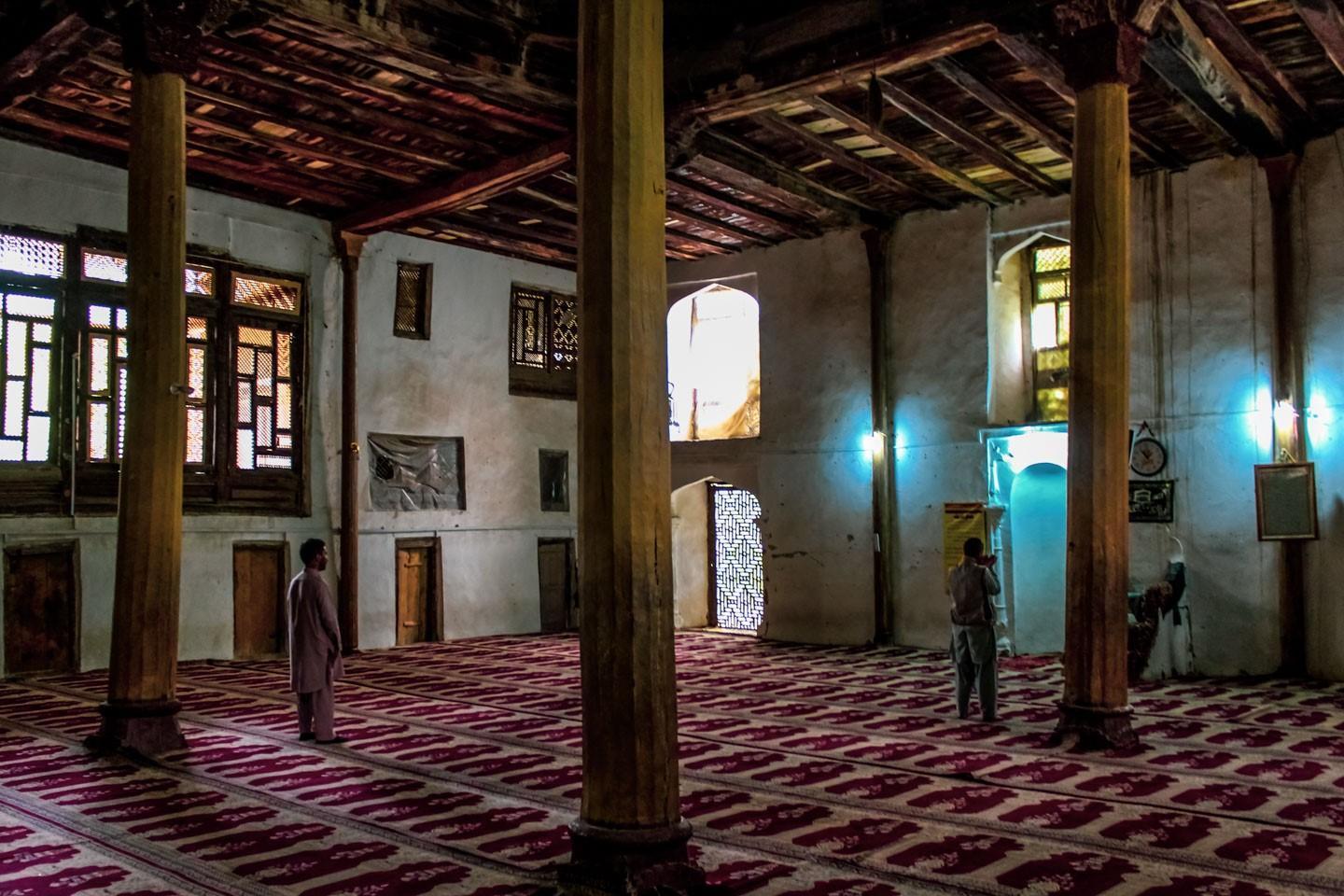 It is a wooden and mud structure, with beautiful wooden intricacy. (A small museum has been established inside the mosque, as it is renovated by Aga Khan Cultural Services, Pakistan (AKCSP). Museums have been helping to create an awareness of the historical significance of the sites. Also, they inculcate a conservational approach among the local community towards historically significant structures. 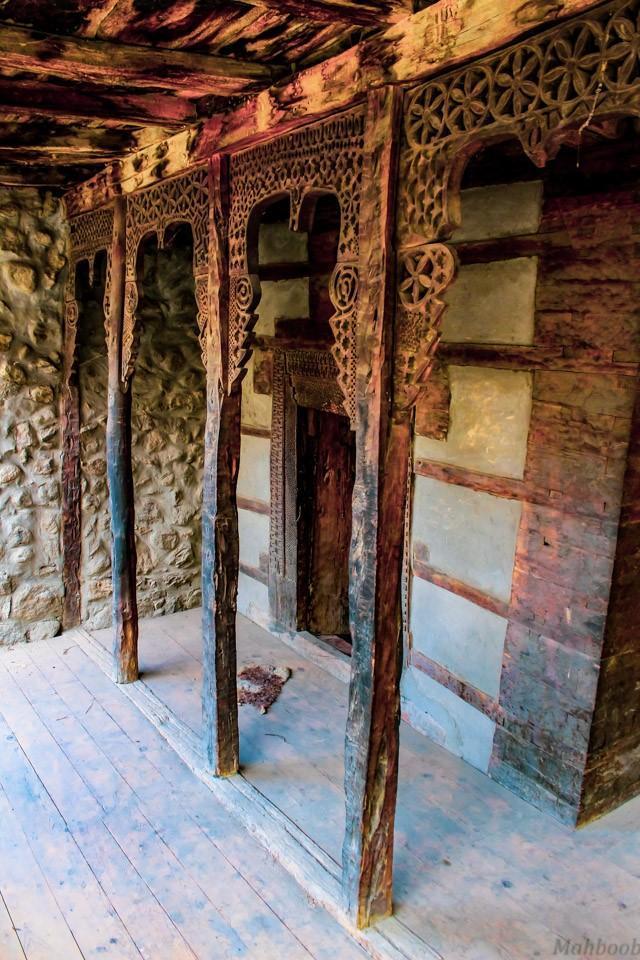 Amburiq Mosque and the Khanqah, both have an architecture that resembles Khaplu’s Chaqchan Mosque and Khaplu Khanqah. Apparently, the same artisans traveled from one town to the next, leaving behind marks of their craftsmanship.

Orchards of Shigar: The Hashupi bagh

Shigar fort is surrounded by lush green orchards and lawns, and you can find blossoming plants of cherries, apricots, apples, and grapes all around in the season. Many small water streams traverse the lawns flowing calmly, producing a very soothing sound that gets louder as the sun goes down and the surroundings get quieter. The grapevine-covered terrace in Shigar fort turned into a restaurant provides a lovely view of the valley with a gushing white stream. 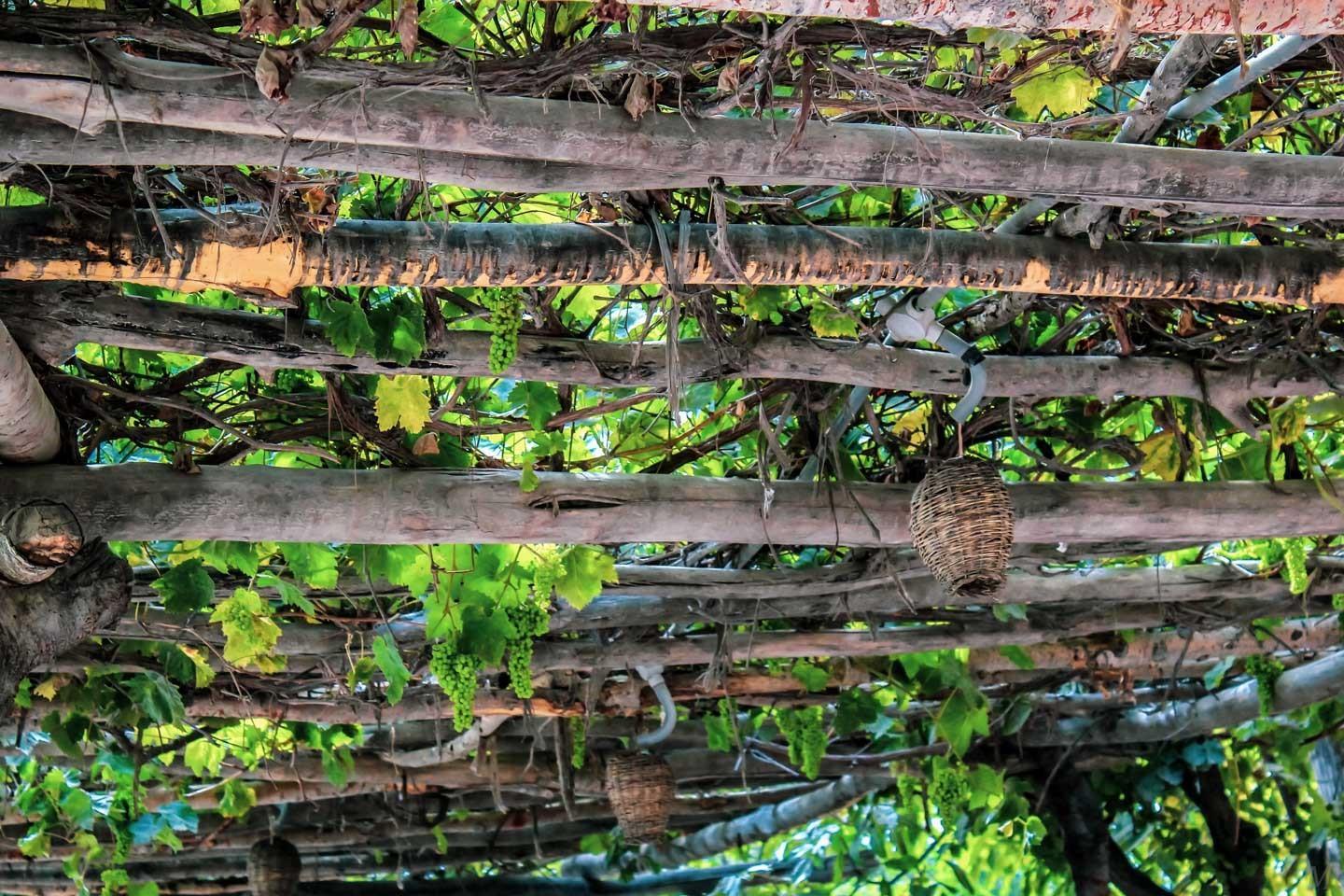 The fort’s entrance opens onto a large garden leading to the Chinpa village and Chaara. The Hashupi Bagh (the apple garden), is a special orchard where you can find a variety of organic fruits, besides apples.

The visit here can be an enriching experience as it not only is a sweet visual treat, but you can also handpick the fresh and juicy fruits while sauntering through the aromatic and vibrant garden. You can take a rest at this serene place, buy organic fruits and enjoy.

The turquoise blue waters of Blind Lake, locally known as Zharba Lake, are 25 minutes drive away from the Shigar viewpoint. It is a downhill drive to the river banks of the Indus River, but the spellbinding view of the blue waters of the lake is exhilarating. It is a delightful spot for photography to capture scenic splendor. 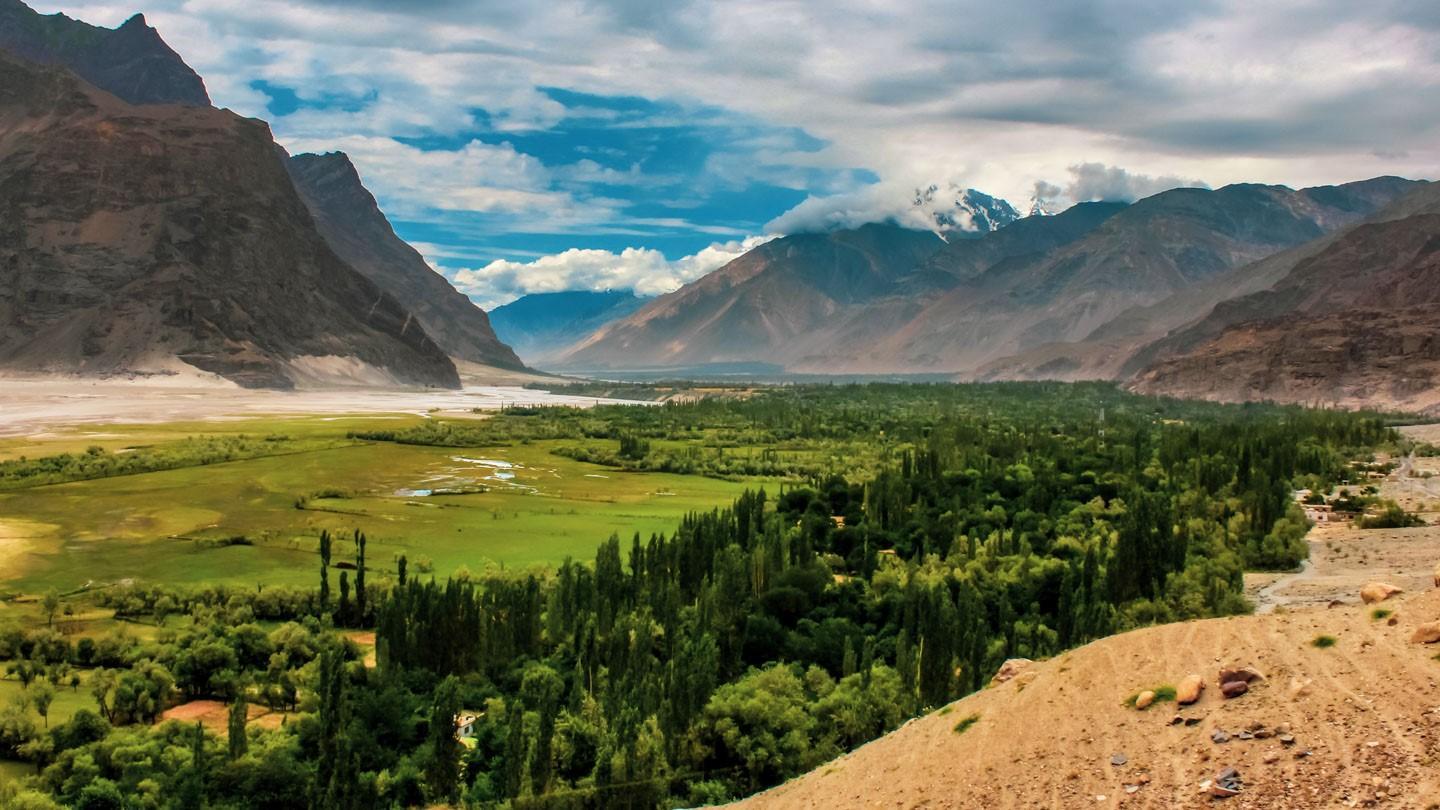 The Hidden lake is another beautiful lake in Shigar valley, which has a live fresh trout farm in its center; you can buy live trout fish from here and get them cooked from nearby small restaurants.

The entire valley of Shigar represents its legendry history. Amachas dynasty was founded in the 11th century when Amachas fled from persecution by Ganesh in Hunza Valley. They built fort Khar-i-Dong as they arrived in Shigar defeating harsh weather, snowstorms, and Hispar glacier.

A few centuries later, the Mughals arrived and uprooted the Amacha Dynasty, being triumphant in a war lasting for many days. Mughals left Amachas to continue their reign in the area as they submitted to Mughals.

The 20th ruler of the Amacha Dynasty built the new fort on top of an enormous boulder, as the former was destroyed by the Mughals. The fort was named Fong Khar meaning “The palace on the rock” which remained the center of power, Raja’s seat in the area until the 1970s.

Rajas of Shigar and surrounding states lost their status as Pakistan merged all states within the region into one administrative unit. However, the descendants from royalties, the Rajas still have local influence over the populace.

Food is also another attraction of Shigar valley. Regional cuisines of Shigar are mouth-watering. You can find many options for continental and local cuisines, like Serena hotel at Shigar Fort, River View hotel in the main Bazar Shigar and Space hotel. “Bhaly” and “plapu” (regional food) are some unique options for foodies.

A variety of gemstones is being mined in the Shigar Valley, Pakistan. These minerals and gemstones include beryl (goshenite and aquamarine), tourmaline (schorl), garnet (almandine–spessartine), apatite, topaz, fluorite, zoisite, clinozoisite, and axinite, mostly occurring in complex or zoned pegmatite and metamorphic rocks.