Attabad situated in Gilgit Baltistan in the valley of Gojal Hunza

“Sweet are the uses of adversity” – William Shakespeare 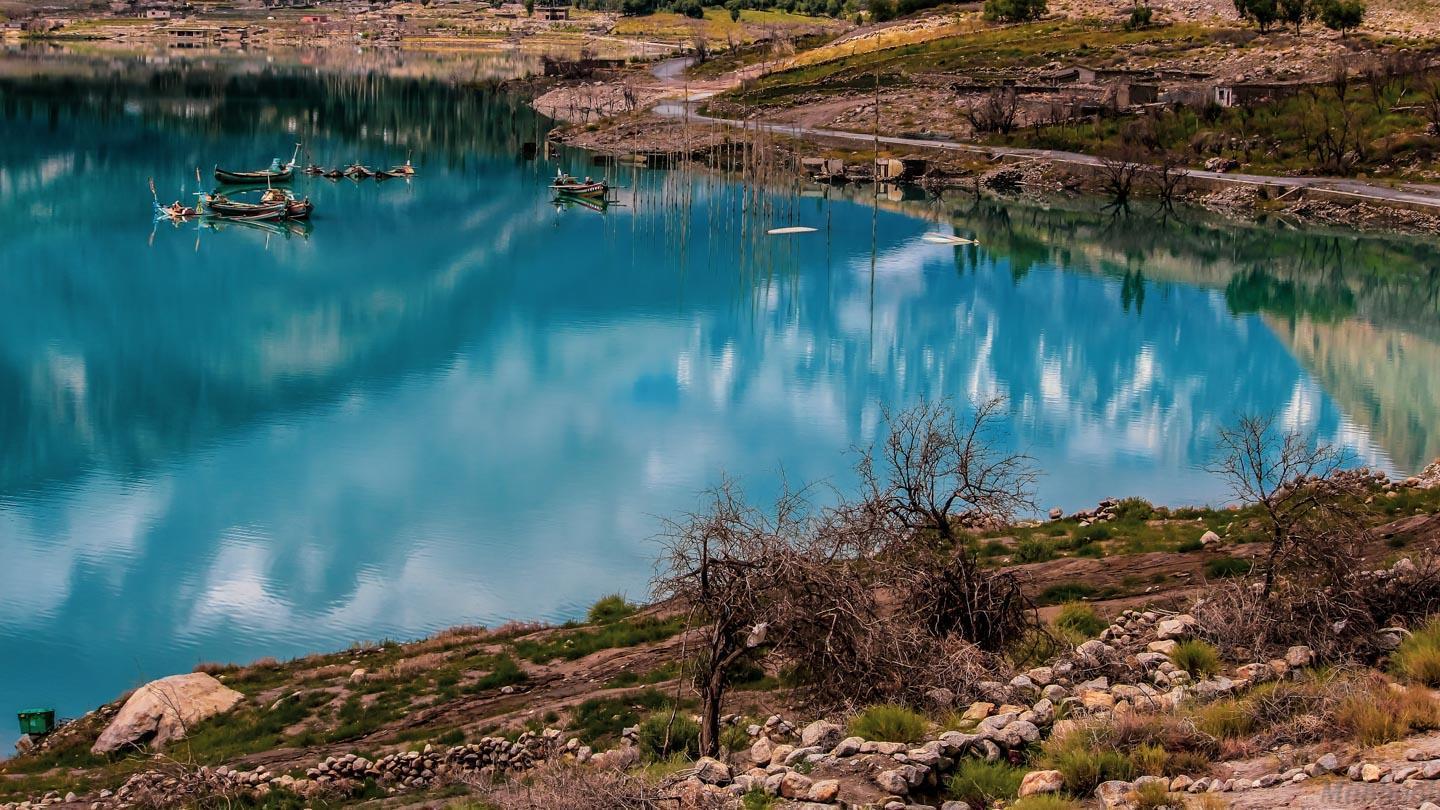 On January 4th, 2010 a landslide hit the remote village of Attabad situated in Gilgit Baltistan in the valley of Gojal Hunza which is 760Km from Islamabad. The landslide resulted in disrupting the flow of the Hunza River and creating a natural dam with a rapidly rising water level. The Attabad disaster affected 25,000 people as the entire valley including five villages to the north were flooded including Shishkat, Hussaini, Ghulkhini, Ayeenabad was completely submerged and Gulmit, a village that serves as the headquarters of Gojal valley was 40% underwater.

The water continued to rise well through June and the resulting lake was 21Km long and over 100 meters in depth with water overflowing the dam making it less likely for a major flooding event. However, many officials believed that as the lake starts to flow, an 18-meter wave might hit the downstream areas. It was reported that as many as 20 people were killed and 242 houses and 135 shops were flooded due to the landslide and a 25 Kilometer part of the Karakoram Highway was destroyed that also served as a trade route between China and Pakistan. The vehicles had to be shipped across the lake to pass through. 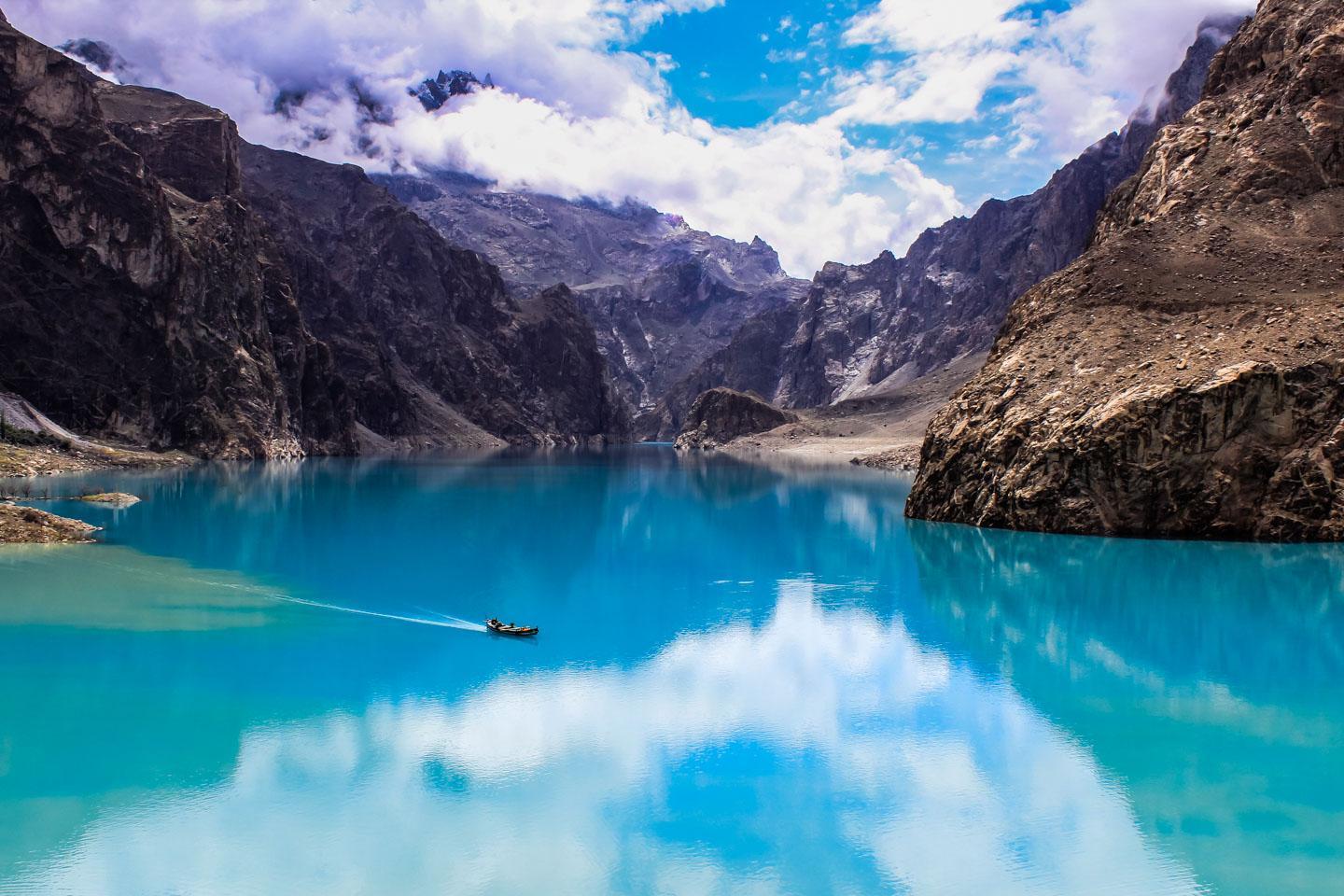 Now, the stunning blue Attabad Lake in our beautiful Pakistan has become one of the main natural attractions of Hunza valley. It is the best place to visit as its clear calm water is surrounded by high peaks of the Karakorum adding magnificently to its grandeur. The realignment project of the affected Karakorum is a construction marvel. A cluster of five tunnels (7Kms in total) is now a part of the newly constructed route.

Attabad Lake, though sprouting from a disaster, now serves as the main source of livelihood for the locals. With its chilly turquoise water, it has added to the existing beauty of the Hunza Valley. 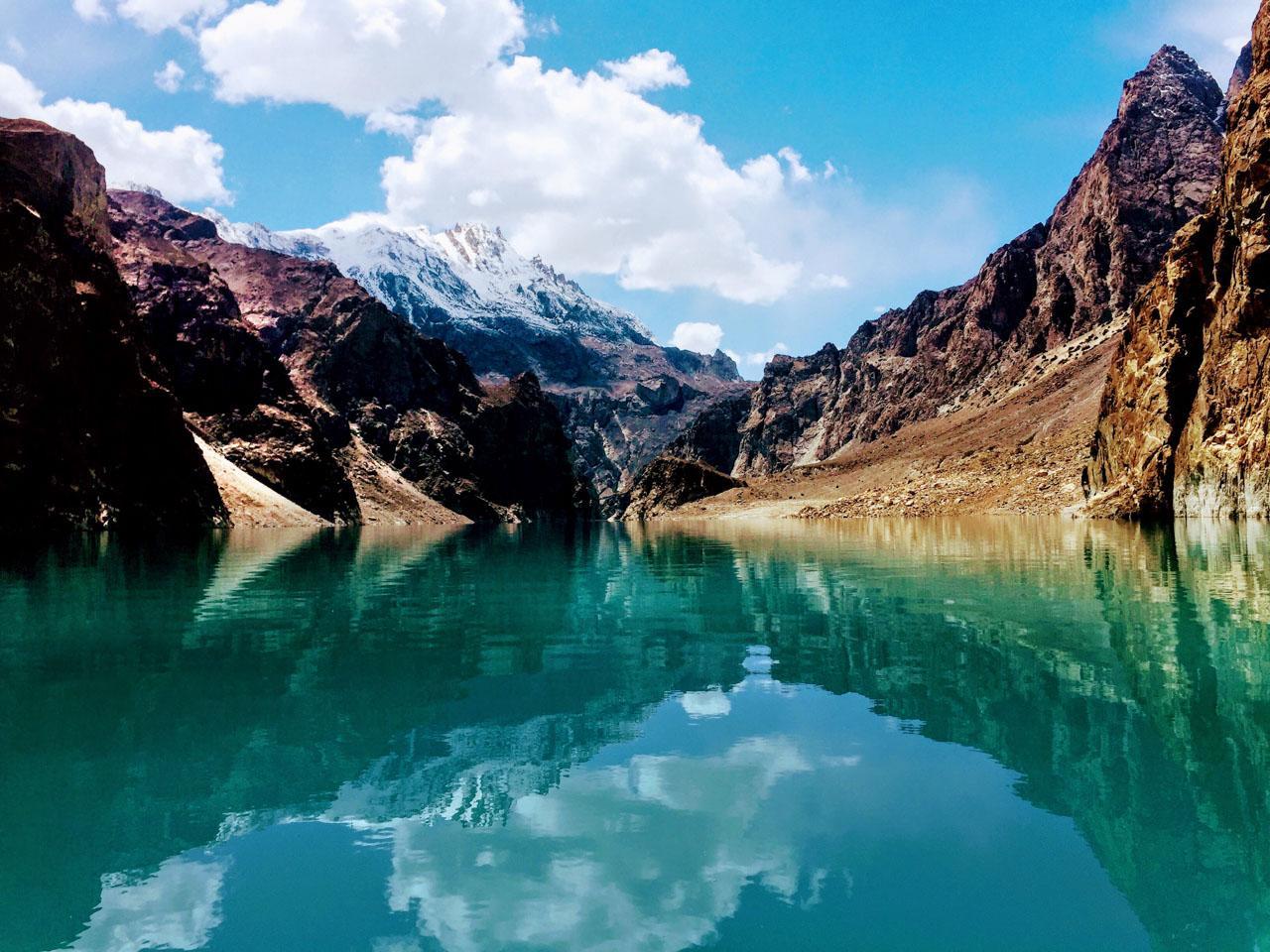 The climate is moderate during summers reaching a maximum of 31 Degrees Celsius. The best weather to visit is from April to October. Tourists from all over the world come flooding in during the peak seasons.

The lake remains frozen during winters. 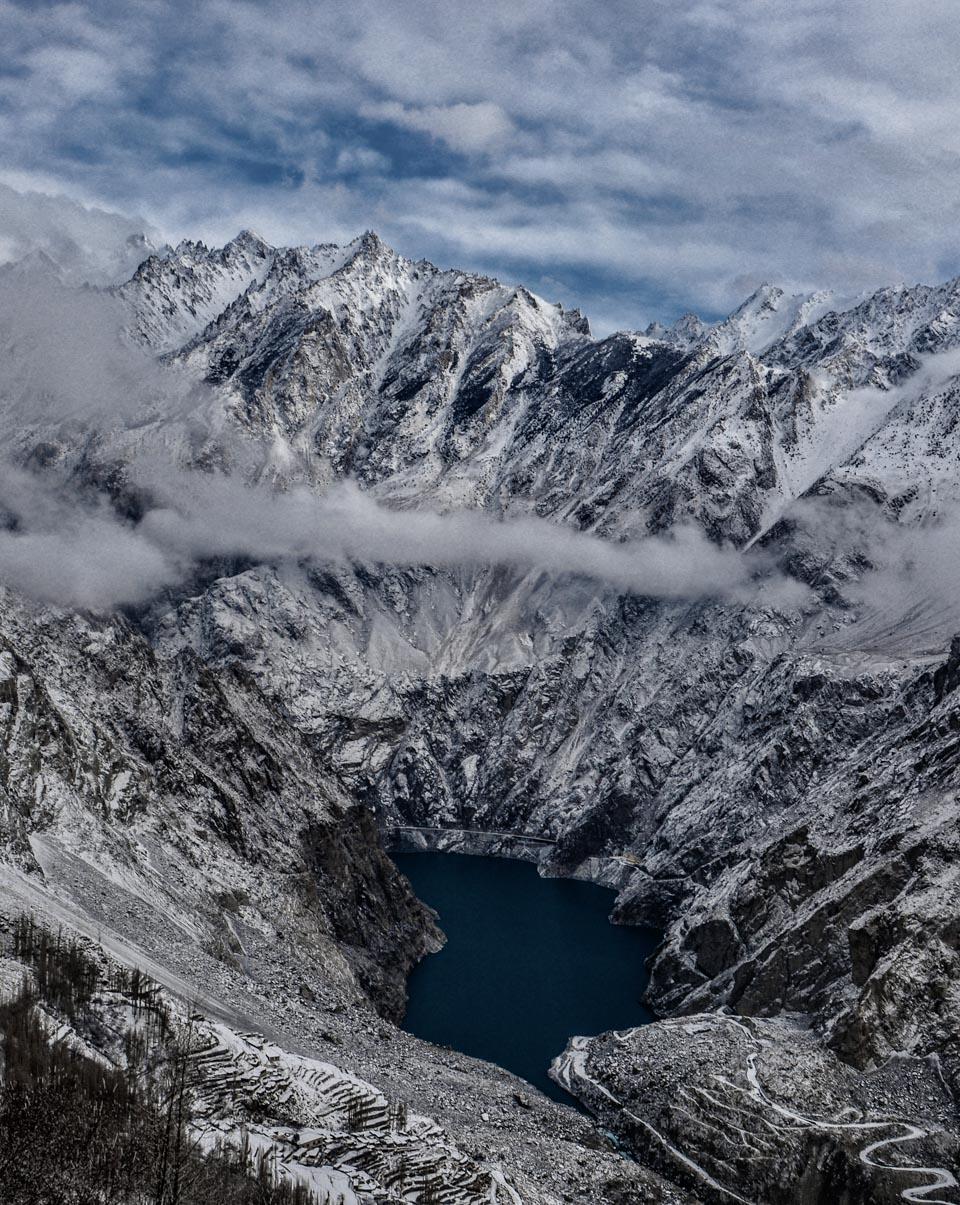 Attabad Lake is situated about half an hour east of Karimabad. You have the option to travel independently or in groups. The route is accessible both via cars or 4×4 vehicles. Once you have reached Karimabad, you travel on the Karakorum Highway towards China and reach the first and the oldest village of Hunza called Ganish which is considered to one of the first settlements alongside the Silk Route featuring an 800-year-old mosque.

The Karakorum highway is well built and well maintained throughout with a possibility of a landslide at some spots. Following the road, for some 20Kms you reach Attabad Lake passing through the valley like a serpent. To reach down the lake you have to go through a dirt road for about half a kilometer before you hit a vast blue lake reflected in the sky like a giant mirror.

What to do there:

Attabad Lake offers many water sports like fishing, boat rides, water skiing, etc. But the magnificence of the lake is the lake itself. 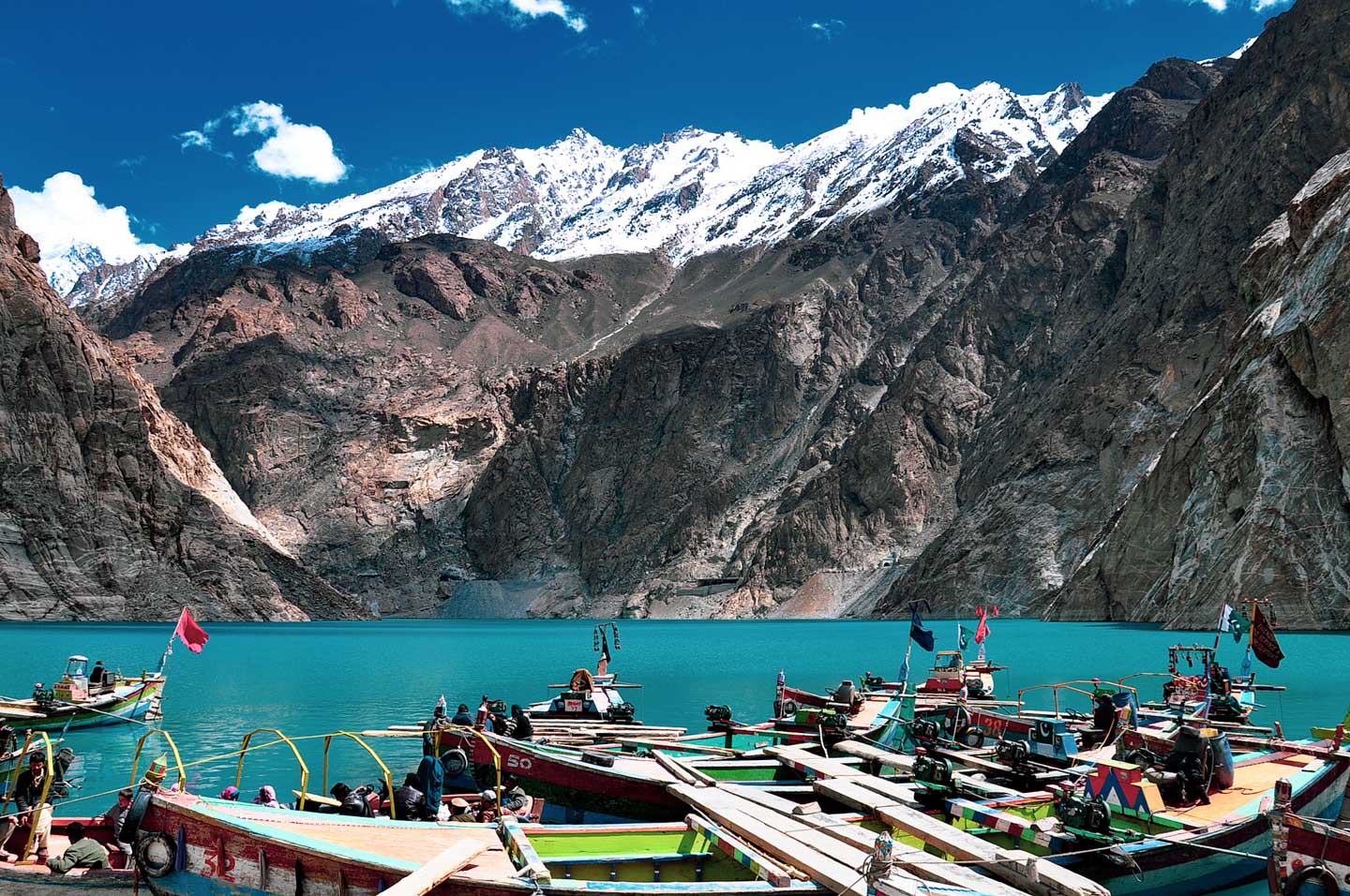 Most of the people have their livelihood dependent on Attabad Lake and are those who were primarily affected by the initial flooding.

Because the area is bustling with tourists, many new hotels and restaurants have been constructed both near to and alongside the lake.