Hazuri Bagh is ideal for those looking for historical sites. 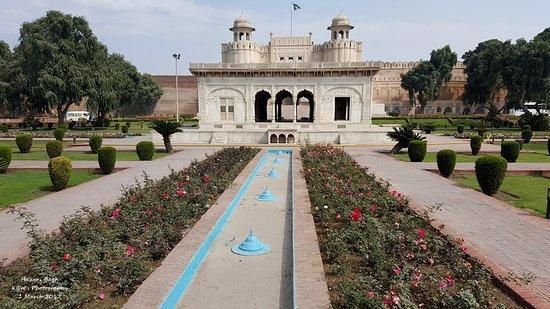 The lovely garden Hazuri Bagh is between Lahore Fort’s Alamgiri gate and Badshahi Mosque’s eastern entrance, which appears to serve as a basin in the midst. The park is a famous tourist attraction for its historical background, serving as Aurangzeb’s seraye and a celebration of Maharaja Ranjit Singh, taking Koh-i-Noor diamond from Shah Shuja. In the antique garden’s interior, there is a white marble erection known as the Hazuri Bagh Baradari or Ranjit Singh’s Baradari. It was constructed under Maharaja Ranjit Singh’s orders in the year 1818. The façade of the Baradari has been completely covered in white marble plucked from numerous Mughal structures in and around Lahore. The decorative method used is mostly relief work, with some jali work thrown in for good measure.

Hazuri Bagh especially holds a very viable location surrounded by so many other historical places; with Badshahi mosque to the west, Alamgiri gate at the east, Roshnai Gate at the north, former medicant cells at the south, south-west, north-west, and north-east, with Lahore fort at the northeast and with Badshahi mosque minarets and Allama Iqbal’s Tomb at South-east.

The weather in Lahore usually hikes up to at least 40° in summers and falls to 7° in winters. The spring is generally delightful with a temperature of 20°. The most appropriate time to visit Hazuri Bagh is the spring when the weather is not too cold or too hot. But you can see it in winter too.

To reach Lahore, you need to follow the M2 motorway, which takes a different time, depending on which route you plan. Then get down at Shadrah and follow the road to reach Hazuri Bagh in 9 minutes, covering 24km. One can easily use their transportation, use a taxi or book a ride from apps like Careem or Uber. 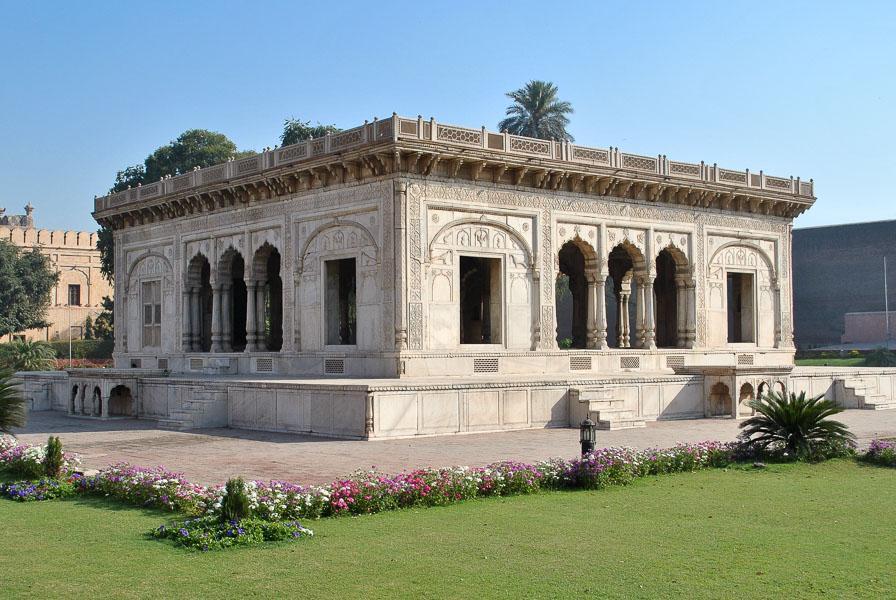 What to Do in Hazuri Bagh:

Hazuri Bagh is ideal for those looking for historical sites. A magnificent tiny building, created by the Maharaja, stands in the center of this square, surrounded by gardens and terraces. The bottom apartment is fourteen feet square and is elaborately decorated with looking-glasses, gilding, and ideally combined colors. A verandah, eight feet wide, with a ceiling adorned in the same manner of profusion, covers the entire structure erected on a chabootra, some four or five feet above the ground Saracenic arches admit light on pillars.
Next, we proceed to upper floor of similar size and shape, but even more exquisitely and lavishly ornamented; the four doors are adorned with ivory and inlaid with numerous devices, each unique and tastefully organized. Finally, there is an underground residence where the Maharaja sought sanctuary from the scorching winds and allowed a few of his closest friends during his leisure hours (Aijazuddin).

The inhabitants of Lahore are well-known not only locally but also internationally for being both welcoming and energetic. It’s much more warm and pleasant because the majority of the residents are Punjabis. Lahore’s culture speaks for itself, with men and women who are as gourmet as they can be, as well as loud and progressive. In Pakistan, Lahore is known as Zinda Dilan e Lahore (Lively Lahorites).