Many tales are associated with Katas Raj, and the constructed and natural heritage components are greatly respected. 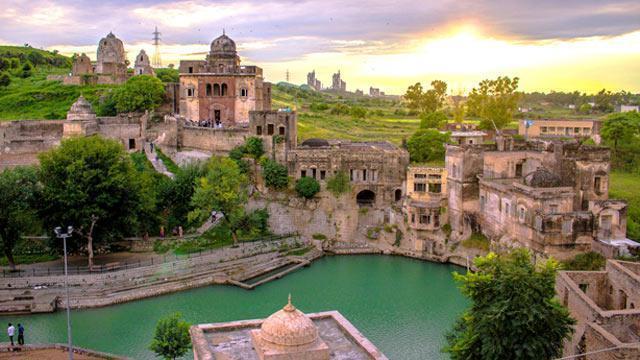 The Katas Raj temples, dedicated to Lord Shiva and credited to Hindu Shahiya (615-950 A.D.), are an important Hindu pilgrimage site in the Punjab of our beautiful country. Pakistan is a famous tourists attraction and the best place to visit. The complex consists of seven Hindu temples that maintain at least 1500 years of history, encompassing numerous dynasties and eras. The magnificent architecture pays homage to Pakistan’s architectural history. Mythology divinities and goddesses. A series of walkways connect the various temples. It is viewed as the primary temple, a major Hindu pilgrimage site, and Hinduism’s second-oldest location for devotion and adoration of their religion. The followers believe that this building was built near the Pandava brothers of the famous Indian epic “Mahabharata” visited. This is also the most important Hindu temple site in the Salt Range.

History and Significance behind the Temples:

Many tales are associated with Katas Raj, and the constructed and natural heritage components are greatly respected. Lord Shiva is one of the three primary Hindu Gods, and the temples are dedicated to him. He is also famous for his strong feelings for his wife, and Katas Raj Temple was built in memory of their love. Brahma and Vishnu are the other two, and when the three come together, they are defined as Trimurti and complete the life cycle.

At the Katasraj site, ancient tools and weapons like granite axes and knives and items such as terracotta bangles and ceramics have been discovered. The latter was related to those found in Harappa, although they were not dated because of a lack of expert judgment.

Summer daytime high temperatures average around 35°C, with nighttime lows of 25°C. The temperature is too cold in winter to be enjoyable for warm-season visitors. During this season, the average high temperature is between 22.4°C and 16.4°C. With temperatures ranging from 2.778°C to 40°C, February till April is considered the ideal time to visit Chakwal. The location is perfect for getting around Chakwal and seeing all of the attractions.

Chakwal is 90 kilometers southeast of Islamabad, the government capital, and 270 kilometers from Lahore, the shared capital. Lahore and Katas Raj Temples are 185 kilometers apart. Therefore, the total distance traveled is 269.1 kilometers. However, the Chakwal District is 40 kilometers away from the Katasraj mandirs. To get to Katasraj by road, exit the M2 motorway (Islamabad-Lahore) at the Kallar Kahar interchange, then follow the road to Choa Saidan Shah for 24 kilometers, passing the cement factory on the way. After passing the cement factory, the route passes through the temple complex, with the significant temple complex and the pond on the right.

What to Do in Katas Raj:

The entire Katas region is around 260 Kanal in size. Its roots can be traced to 200-300 BC. Every year, 200-300 Indian Hindus go to Pakistan to visit this temple, which is also visited by local Hindus.

The Lake of tears:

There is also a pool here known as “The Lake of Tears,” where Hindus visit for bathing. It’s a Holy Spring, to be sure. This location is related to the Brahmanical tale of Shiva, whose inconsolable sadness over the wife’s death Sati resulted in a shower of tears that formed two pools of water — one near Ajmer and the other near Katas. The pond is 150 feet deep, and many bodies have been discovered there. In addition, the pond is home to a large grass cutter and Gulfam fish. The grasscutter fish cuts all of the grass above the pool.

When Hanuman and Ram Chandra got into a fight, Shiv fought with Ram Chandra along with Hanuman, and Shiv won and became the king of Katas.

A haveli from the British era can also be discovered at Katas Raj, which is presently used as a police station.

Another Hari Singh Nalwa haveli exists, built during the Sikh era and created by the Sikh ruler Raja Ranjit Singhhain Katas over 50 years.

In Katas, you can find the Sathghara (white color mandir) or seven other Buddhist period pyramidal temples. They are essential and are at the highest point on the site, reflecting the architectural style of the Kashmiri temples. The temples are from the Hindu Shahi era, while the 200-foot-high Asokan temple is from the Asokan period.

The Main Mandir for marriage is found on the backside of the police station. Many Hindu get married there.

Only University of SouthAsia

Katas Raj had the only university in South Asia, and Abu Rayhan, also known as Al-Biruni, left his mark there. He spent two years there studying. His name is now linked with this university.

The most beautiful thing here is ancient artwork known as “real chitar karee,” also known as pietra dura, from which the archaeology department gets design samples. All the buildings were built from Choona (calcium oxide).

Chakwal is known for its rich culture, history, art, and luxurious surroundings. Saraiki’s dialect Dhani is the common language of the inhabitants of Chakwal. Saraiki is of Chakwal is a hybrid of Pothohari (30%), Saraiki (90%), and Hindi (50 percent). People of many cultures mixed, and languages embraced one other as well. Chakwal is predominantly an agricultural region with a distinct ethnicity. This region’s people are tough fighters and stub-born. Education is quite common in this region. Women prefer to work in schools, and other occupations are not very attractive to them. People usually wear Shalwar Kameez. However, there is a strong Hindu influence here. The locals are courteous and welcoming.