“I love you when you bow in your mosque, kneel in your temple, pray in your church. For you and I are sons of one religion, and it is the spirit. ” (Khalil Gibran)

Mahabat Khan Mosque stands today in the old city of Andar Shehr Bazaar, Peshawar, KPK. It is the best masterpiece of Mughal architecture and a holy place of tourists attraction. 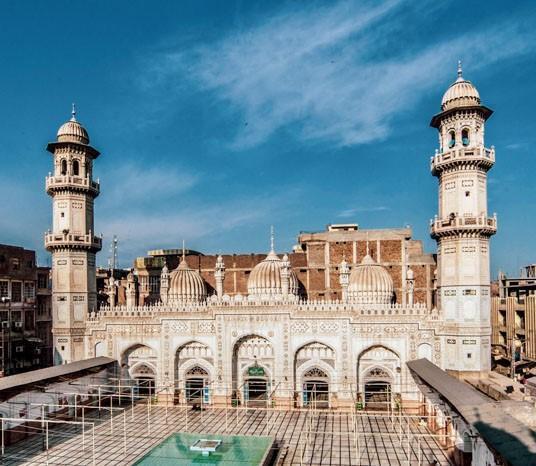 Emperor Shahjahan constructed it during his reign in 1670 AD. According to some historians, the King used Mahabat Khan Mosque’s tall minarets to hang criminals as a substitute for gallows. When the Soviet Union invaded Afghanistan, tribal chiefs would convene at the Mosque to rally the Afghan people against the Soviets. In addition, an entrance to the Mosque leads to a vast prayer courtyard.

This Mosque, frequently mispronounced as ‘Mohabbat Khan,’ is unquestionably one of Peshawar’s most famous tourist attractions. At any given moment, about 14 thousand people can pray within this iconic Mosque and its adjacent courtyard.

If you want to view this Mosque, go to the Old Bazaar in Peshawar’s old city, and the people would gladly take you around. Then take the Kachahry Road to Chowk Yadgar, park your car there, and walk west into the Bazaar to visit the Mosque, located at the street’s highest point.

The immaculate white Mahabat Khan Mosque, named after the Mughal governor of Peshawar, Nawab Mahabat Khan, is a stunning reminder of the Mughal Empire’s glory. He had served during the era of Emperor Shah Jahan and his son, Emperor Aurangzeb, and built it during their reign in the seventeenth century. They named the Mosque after Mahabat Khan Mirza Lerharsib, who ruled Peshawar twice under Shah Jahan and Aurangzeb. The precise completion date of this masjid is unknown because three years have been assigned to it: 1627, 1630, and 1670 A.D. However, 1670 is regarded to be a more important date for masjid completion than the other two.

Mahabat Khan Mosque is one of the hidden treasures of Peshawar, among many other heritage monuments of the city. It is a beautiful piece of architecture and history. It contains a large prayer hall with five arched entryways and three domes. Six miniature decorative minarets were built on top of the main entrance, lined by two tall minarets. There are stunning floral and geometric designs on the ceiling of the Mosque.
Besides, its front is composed of beautiful white marble. Moreover, a calm blue-tiled ablution pond sits in the middle of the side yard, flanked on either side by a row of compartments and a central prayer hall on the west side. 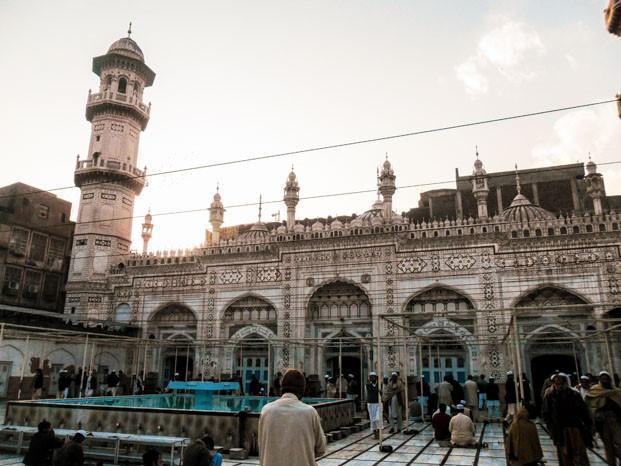