Trango Towers are a range of rock towers, presenting some of the grinding rock climbing in the world

Trango Towers are a range of rock towers, presenting some of the most challenging and grinding rock climbing in the world. These awe-inspiring towers are located in the most beautiful north of Pakistan, named Gilgit-Baltistan. These most enormous cliffs are a subrange of the Karakoram range, centered in Baltoro Muztagh and in the North of Baltoro glacier. The whole range of the Trango Towers rests on the ridge, approximately northwest- southeast, dividing the Trango Glacier, which is on the west, and the Dinge Glacier, which lies on the east. Annually, various expeditions from all over the globe accept this strenuous challenge, where they decide to visit the Karakoram Range and feel happy to accomplish climbing this difficult granite with great exertion. 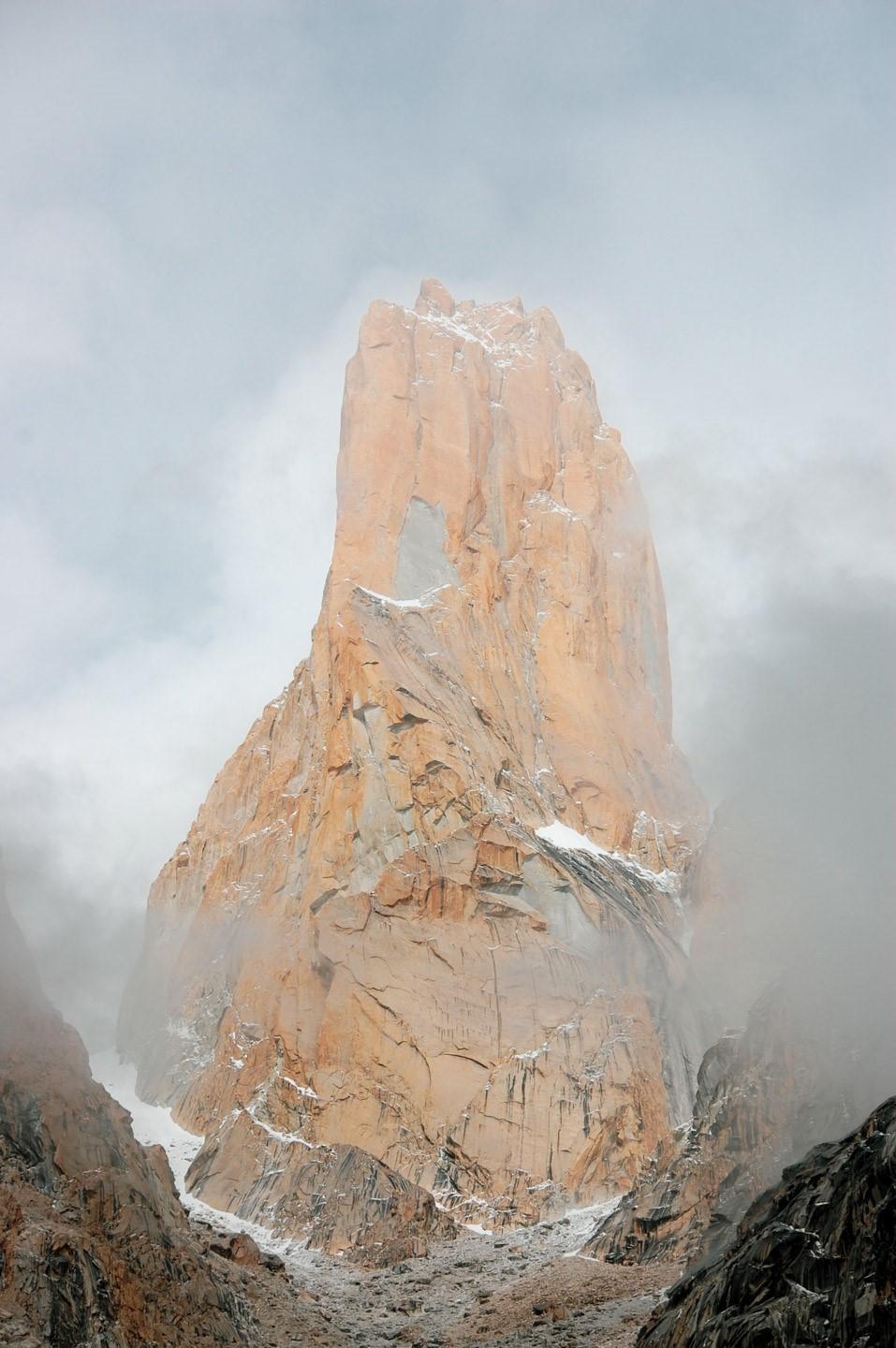 The Great Trango tower is a massif itself and distinguished by its four recognizable summits, which are as follows

2- Second, the South or Southwest lies at a height of

The Great Trango Tower is marked by its unique trait of having the most elevated point from the family of the towers at 6,286m (20,623 ft). The other noticeable feature is the east face of the Great Trango Tower, which is famous for the World’s greatest nearly vertical drop. It is made up of an intricate network of steep snow and ice ravines. This complex combination contains steeper rock faces, and vertical to overhanging headwalls ended with a snowy ridge structure.

The Trango Tower, frequently called Nameless Tower, rests Precisely on the northwest of the Great Trango towers. The height of this tower is 6,239 m (20,469 ft). This tower is a prominent, tapered, quietly well-balanced spire that bulges out around 1,000 m (3,300 ft) from its ridgeline.

Similarly, towards the north of the Trango Towers, there lies a smaller rock steeple called Tango Monk. To the north of this exciting feature, although the summits constantly get taller but the hilltop reduces its rockiness and leaves the granite walls that make the Tango towers batch the most attractive to the climbers, hikers, and visitors. These summits are rarely considered as part of the Trango towers group, even though they share the same Trango name.

All in all, the Trango towers are one of the most demanding and crucial ascends ever accomplished. This is due to the blend of the characteristics, which are the altitude, the total height of the routes, and the slope of the rocks. Nevertheless, all of the mountains are technical and highly complex, but all are possible to conquer. 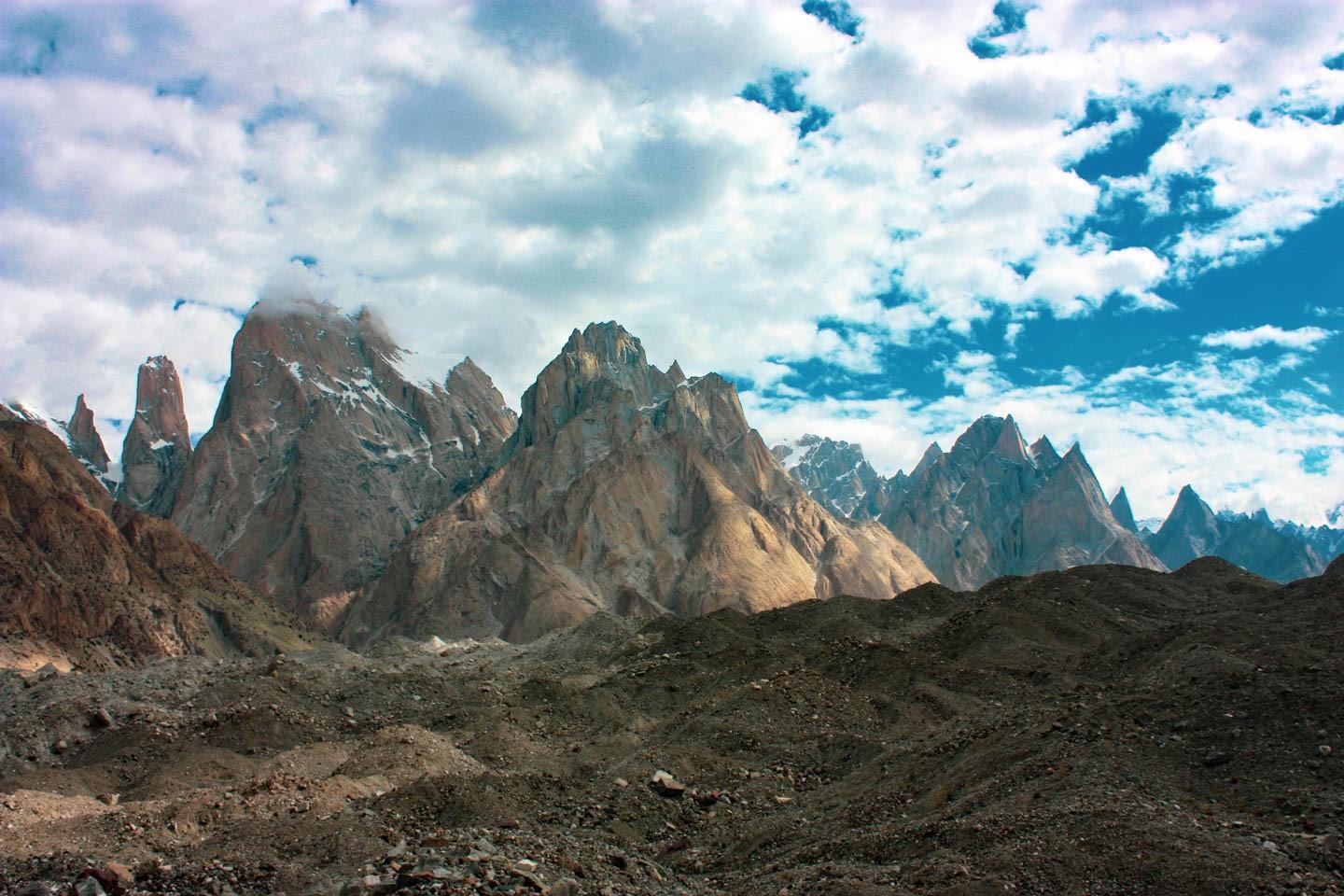 The names of the climbers who climbed the Great TarangoIn 1977 are Galen Rowell, John Roskelley, Kim Schmitz, Jim Morrissey, and Dennis Hennek. The route began at the west side of the mountain and climbed a mixture of ice ramps and gullies with rock faces. This route ended at the upper south face.

Andy Selters and Scott Woolums climbed another route of the Great Trango in 1984, which lies on the Northwest Face; through this lengthy, complex alpine climb ascends with a wide rocky area and ice climbing.

In 1984, Christian Doseth and Finn Dæhli from Norway climbed the east side of the Great Trango Towers. Unfortunately, both of the climbers passed away on the climb back down from the summit.

In 1976, the British climbers Joe brown, with his team Mo Anthoine, Martin Boysen, and Malcom Howells, climbed The Nameless Torango Tower for the very first time. To this summit, eight different routes could be climbed. 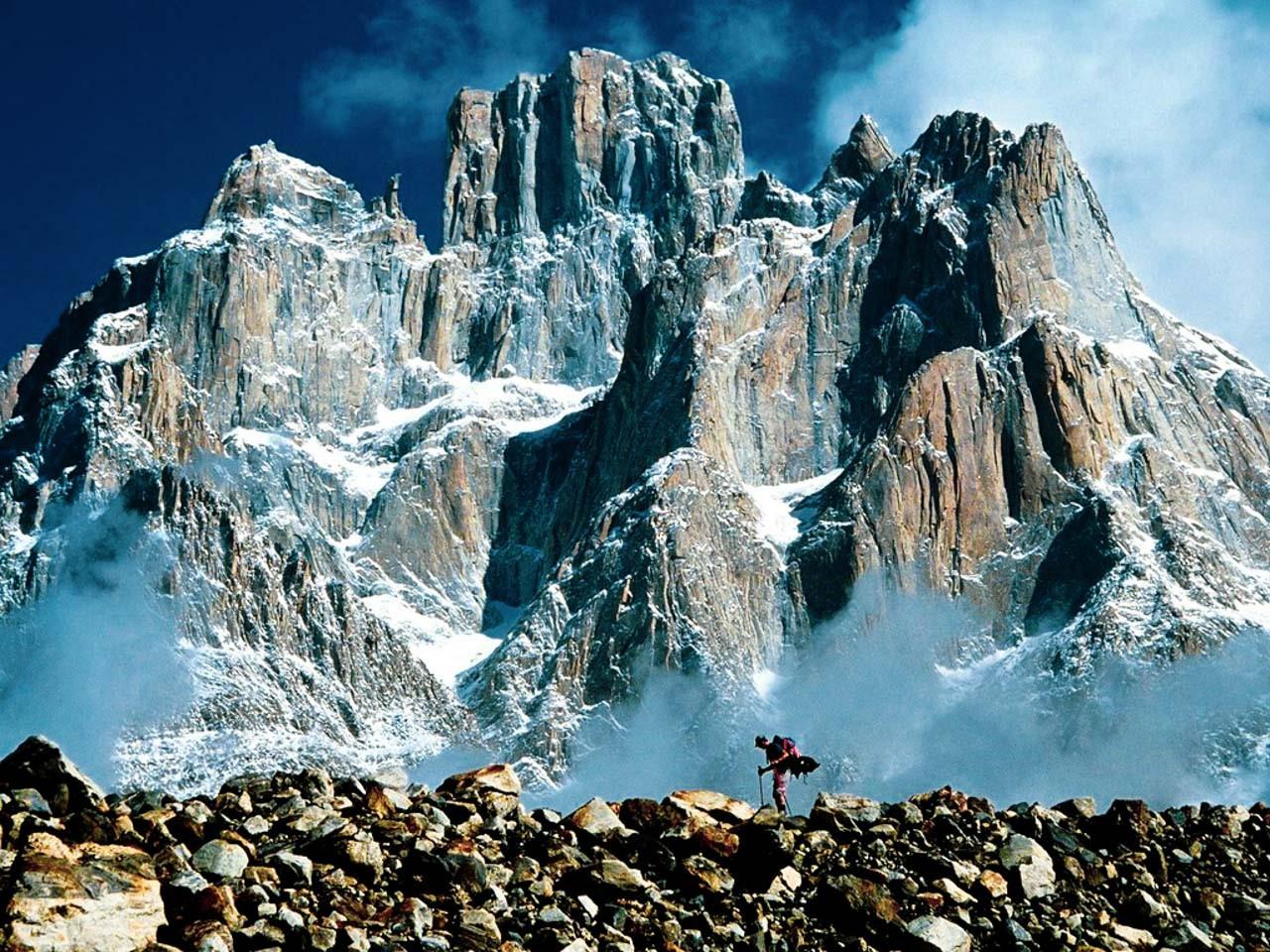 In 1987, the second and third time climbing of the Trango (Nameless) Towers were attempted, which was a failure. This was with the introduction of the two new routes: the Slovenian Route, also popularly called as the Yugoslav route, climbed by Slavko Cankar, Franc Knez and BoanSrot (a neat, clear, analytical route on the South-southeast face), and the Great Overhanging Dihedral Route -climbed by Swiss/French team; Michel TchoukyFauquet, Patrick Delale, Michel Piola and Stephane Schaffter- on the western pillar, an extraordinary and practical ascent.

On 20th September 1989, by the Kurt Albert, Wolfgang Gullich, Milan Sykora and Christoph Stiegler, another noteworthy path called the Eternal Flame -named after a Bangles song- was climbed. The towers’ South-East face was climbed and entirely free. These climbs introduced an era of clarified rock-climbing methods and aesthetics on high-altitude summits.

On 6th September 1990, Catherine Destivelle, along with Jeff Lowe and David Breashears achieved the first female ascent. This was accomplished in free climbing style, via the Yugoslav route.

In the summer of 2009, by Franz Hinterbrandner, Mario Walder and Alexander and Thomas Huber, the first free ascent of Eternal Flame was achieved.

In 1999, the two summits, one is the West summit of Great Trango and the other is the TrangoPupit, were climbed by two individual teams, an American and a Russian, nearly concurrently, by parallel routes.

The American team was comprised of three people, Alex Lowe, Jared Ogden, and Mark Synnott. They climbed the path called Parallel Worlds, which is a wide and highly technical route. On the other hand, the Russian team of four people, Igor Potan’kin, AlexandrOdintsov, Ivan Samoilenko ,and Yuri Koshelenko, climbed a similar prominent path and came across similar hardships.

Similarly, the Trango Pulpit was climbed by a Norwegian team called Norwegian Direct of Robert Caspersen, Gunnar Karlsen, Per L. Skjerven, and ElinarWold, on the Northeast face, over a period of 38 days on the wall.

These towers also acquired popularity in social media. They are called in various tv series, movies, and games.

Initially, in the movie Point Break, a 2015 Hollywood movie, the Towers are mentioned as an available location for an assignment by supreme poly athletes as part of Ozaki 8: a list of eight extreme ordeals to honor the forces of nature in their bid to achieve Nirvana.

Similarly, in an episode of the season named “The Good wife”, ‘the Death Zone’, a fictional British character Oliver Cardiff, had climbed the Trango Towers (accurately Trango II). 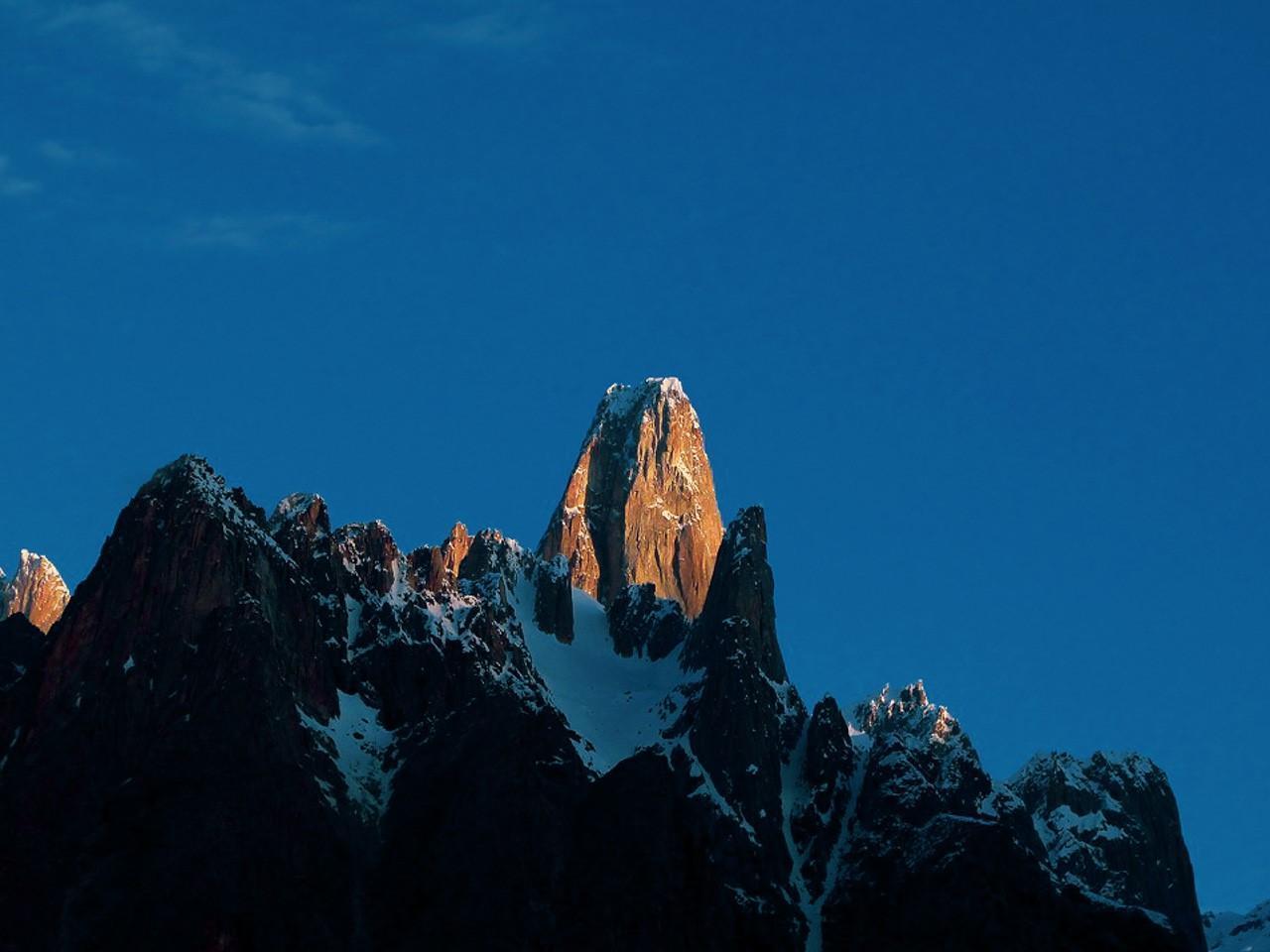