Our beautiful country Pakistan is home to the most amazing natural diversity. 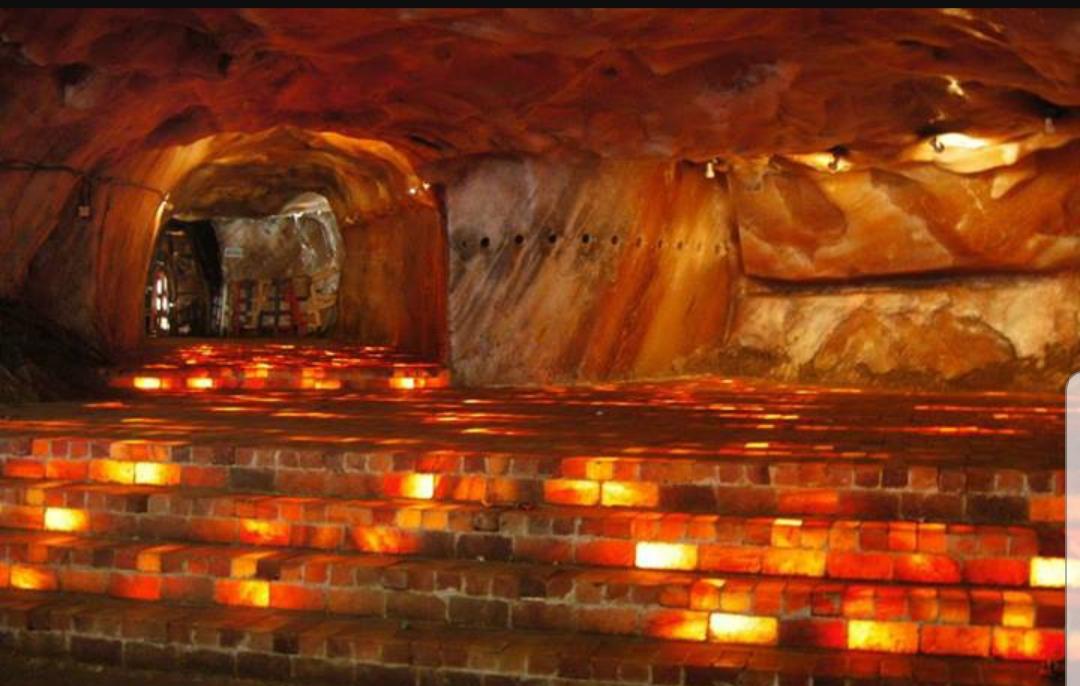 Our beautiful country Pakistan is home to the most amazing natural diversity. Khewra Salt Mine is among them and the best place to visit. This mine is a world-famous tourist destination. It is located in the city of Khewra, near Pind Dadan Khan, Punjab. Today, these mines are the world’s second-biggest, producing 325,000 tons of salt each year and an anticipated 220 million tons during the mine’s lifetime.
The route to the mine begins with a lengthy tunnel, followed by an electric train ride within. During your train trip, you will notice the tunnel’s walls, which are entirely formed of salt. There are many attractions at the mine. The mine is open all year and attracts travelers worldwide, not only from Pakistan. In a nutshell, while you’re in the mine, you’re in an artistic.

Discovery of the Salt Mines:

ALEXANDER THE GREAT, the Greek king famed for establishing an empire stretched from Asia to Africa and Europe, passed through Pakistan in 326 BC. Alexander’s horse began licking the stones on the ground as he stopped his troops for a break at the area now known as Khewra. After seeing and observing that all the horses were doing so, a soldier tried one himself and discovered that the rocks were extremely salty. Thus, the salt deposits of Khewra had been found.

Visitors may go into the mines and see wonders like a mosque, a replica of the Minar-e-Pakistan, a dispensary, Chaghi Mountain, and other colorful structures built of salt bricks. The monuments are illuminated from within. These models not only portray renowned locations or people, but they also reflect the artist’s natural talent. It demonstrates their dedication to the art, and the bright models represent the hues found in the artists’ thoughts and ideas.

Summers in Khewra is brief, hot, humid, and precise, while winters are quick, cold, dry, and usually clear. The temperature generally ranges from 39°C in the summer to 27°C in the spring and 21°C in the winter. Summers are scorching hot, but as soon as you enter the tunnel, the temperature surprisingly drops. However, the best time would be summer or spring, because the tunnel itself is freezing.

If you’ve already begun arranging your visit to the mines, the next question you’ll have is how to get there. The M-2 Lahore to Islamabad Motorway takes three hours to reach Khewra from Lahore. It’s a 2.5-hour journey from Islamabad using the same road. The railway station at Khewra is also functioning, with special trains running at regular intervals from Lahore and Rawalpindi.

What to Do in Hazuri Bagh:

The Khewra Mines include about 40 kilometers of tunnels and 19 levels, with 7 above.

If you’ve always wanted to ride a mining train, this is the place to do it. The electric train that travels from the mine entrance to the main hall is claimed to date back to the 1930s when mining at Khewra initially began. However, it is in excellent operating order, and transport is charged on a per-person basis. So a party of 12 or more people might pay per trip instead of per person for the ride. If you wish to explore the mine at your speed, you can enter it on foot.

The train trip concludes at the mine’s center cavern, a 75-meter-high assembly hall. People are often taken aback by the vastness of space. In addition, there is a natural sculpture on the wall that looks like Allama Iqbal.

After saying your goodbyes to the train, you’ll most likely see the Badshahi Mosque, located within the central chamber. The mosque is remarkable in that it is entirely built of rock salt, with various colored salt bricks. Because the mine is known for its white, pink, and reddish salt deposits, you can imagine how impressive this building is, especially when lit by lights buried in niches along the walls. In addition, two of the mosque’s minarets are made of rock salt. 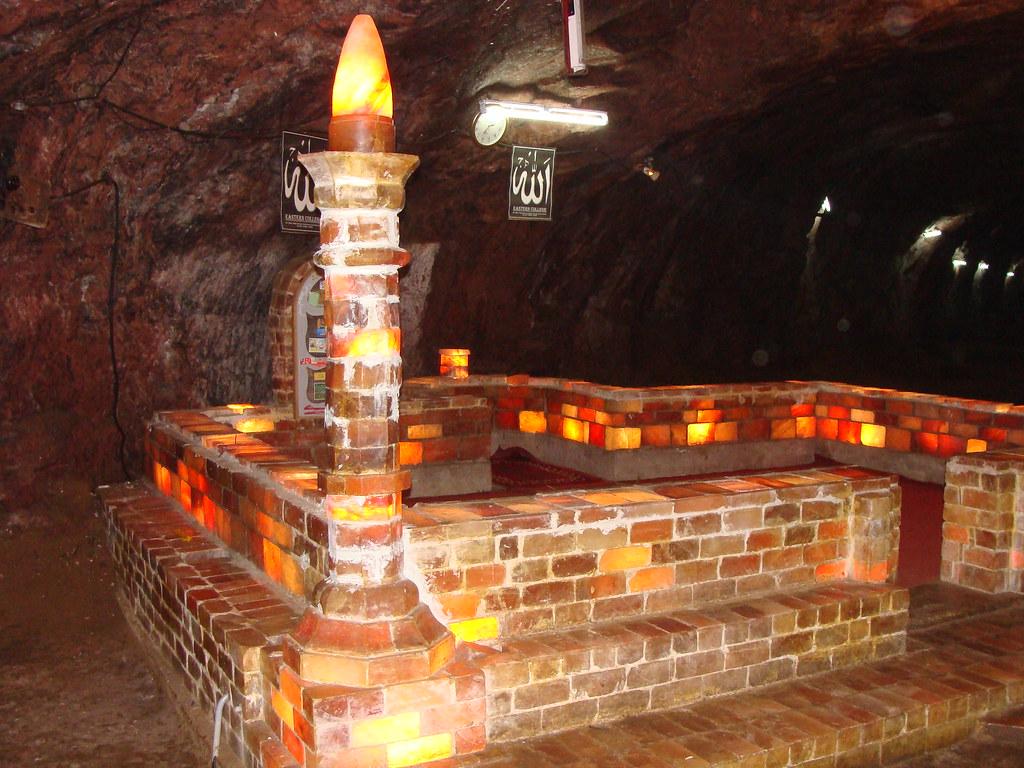 If you thought the mosque was impressive, wait till you see the following several attractions. Miniature copies of renowned monuments are created and carved totally out of rock salt in the main tunnel. ‘The Great Wall of China,’ also Pakistan’s own ‘Minar-e-Pakistan,’ the ‘Shimla Hill of Lahore,’ and the ‘Mall Road of Murree,’ are amongst them. Each of these monuments has been beautifully illuminated to enhance the multi-colored salt’s beauty.

While no salt flows from this fountain, it is named because of the natural shape that this salt deposit has developed over the years, giving it the appearance of a flowing water fountain.

If you’ve ever been to the Dead Sea and seen how everything floats, you’ll understand what the ponds within the Khewra Mines are like. Several saltwater ponds are found within the mines, even though no one is permitted to use them. Over the ponds, bridges have been built to assist you in crossing. 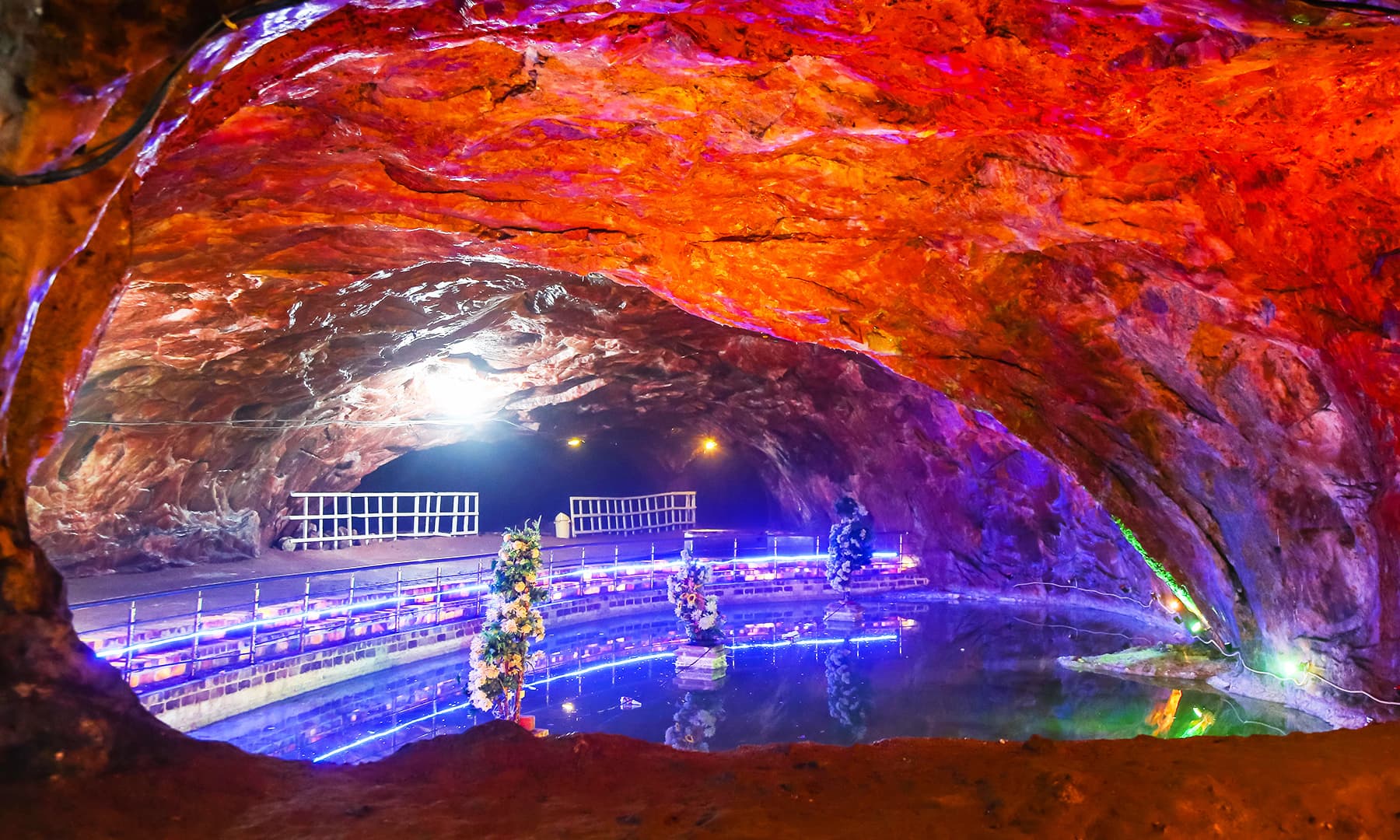 This tiny 25-foot-long bridge, also known as Paul Saraat, spans a 100-foot-deep pond of saline water. This bridge is remarkable because it is entirely built of salt and has no columns or pillars to support it. 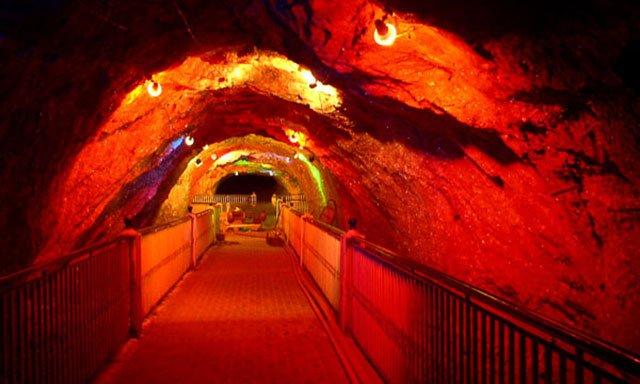 The Palace of Mirrors, also known as Sheesh Mahal, is a tunnel within the mines named for the salt roof of the tunnel, reflecting the low lights like a mirror. The guided trip includes a visit to the tunnel. 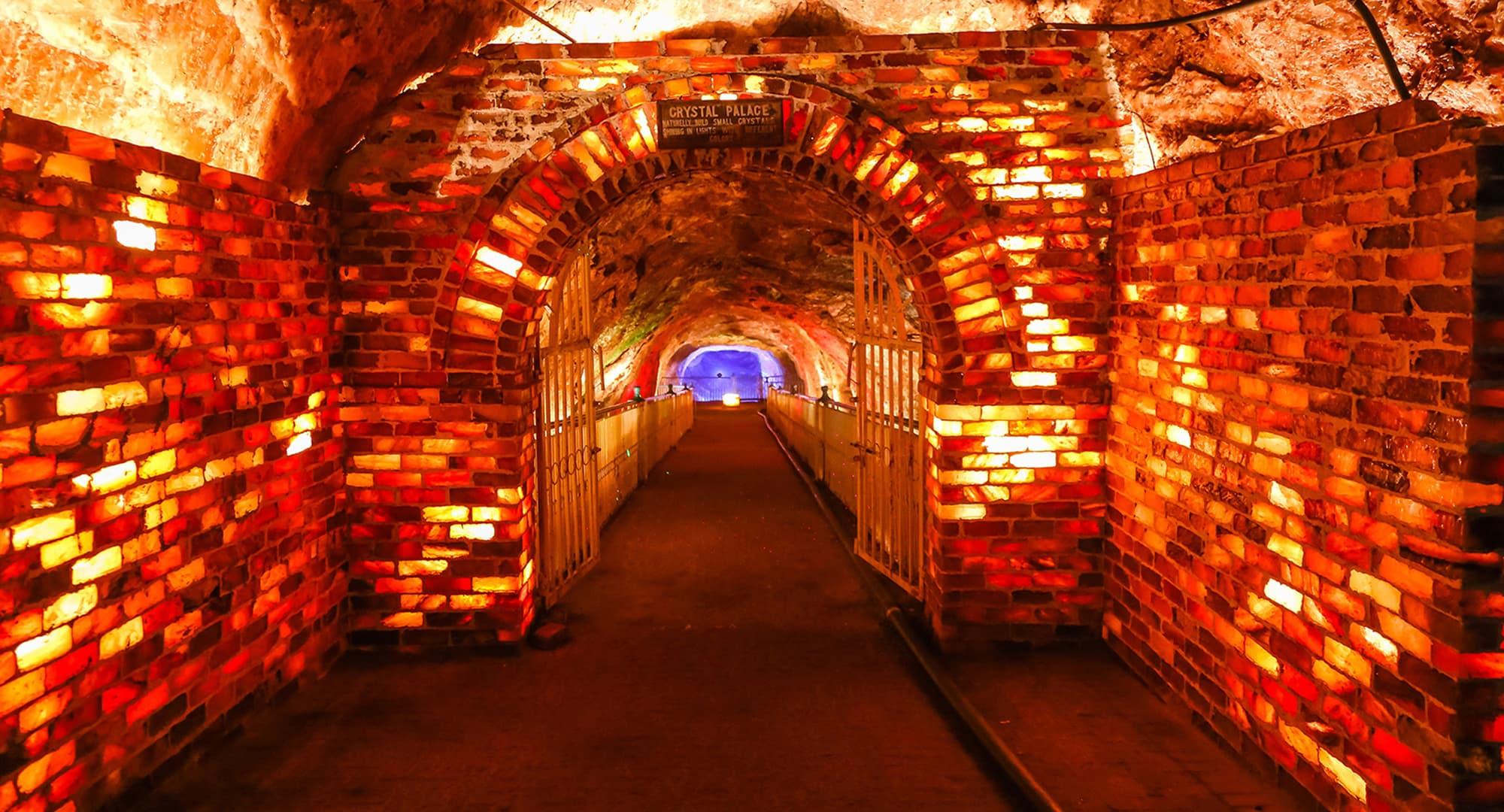 The Khewra Salt Mine also contains the world’s only post office made entirely of salt bricks. It’s a fully operational post office that’s used mainly by my staff.

The natural qualities of rock salt change the air within mines, and the resulting atmosphere is suitable for those with respiratory problems. As a result, the PMDC established a deep underground Asthma Resort, which has attracted patients worldwide. The resort’s welcome room features a fountain, armchairs, and television, creating a pleasant atmosphere. The clinic itself has 12 beds, which are housed in six salt-brick cottages. The entire room is gently illuminated with lighting, while fans provide air to preserve the alleged beneficial ‘micro-climate for patients.

The hospitality of the People:

The people of Pakistan, in general, are very welcoming and warm to tourists, and as for the people of Khewra, they mainly are delightful and friendly. Plan your tour to khewra salt mine with a guide to Pakistan.